A gathering of angels appeared above my head... 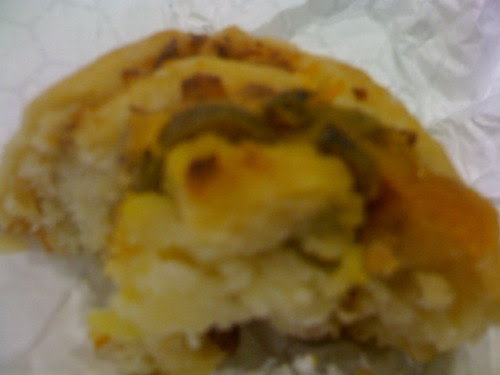 ...is precisely what I experienced when I bit into the sausage, cheese, and jalapeño biscuit from Ambrosia. Nevermind that Styx was playing on the omnipresent and almost deafening muzak the ladies that run Baton Rouge apparently like to blare in their charming boutiques and eateries. I've written about this confection before, but this time it was biscuit-ier, which is a direction that I believe they should go.

Afterwards we had a sweet day ending our endless vacation. My wife was rocking some Queen - man, now The Game is how you have a hit goddamn record. I remember one of my friends when I was twelve had that, Billy Joel's Glass Houses and AC/DC's For Those About To Rock, his three choices from his dad's Columbia House selection, and we would play Lego's all afternoon to those three records. You didn't need any others because those three records had everything.

As Dennis DeYoung said, "I think of childhood friends and the dreams we had/we lived happily forever, so the story goes..."

Speaking of Lego's, a chunk of our day involved Maya and me finishing all 137 steps of the Rebel Base at Endor. 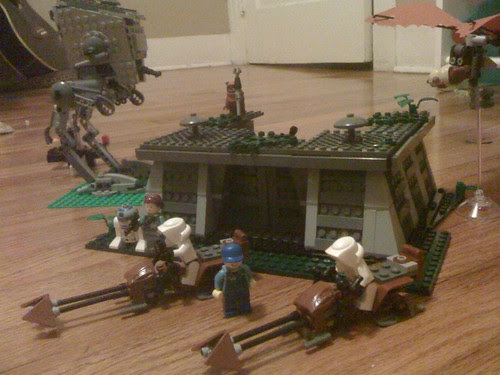 You can't tell from the photo, but the blast doors of the base open via a complex gear mechanism and the AT-AT walks. I almost wish we'd embarked on a stop motion film assembly project with new and instant family favorite Owl City chirping in the background. That Owl City kid is so ebullient, it would not surprise me to hear that he'd done some time in Up With People. No cheerier tune will do when you are deep in complex Lego assembly than "Umbrella Beach," my daughter's favorite.

Umbrella Beach - Owl City
Mr. Owl left me so synth-giddy that I chose to walk down to the interview I had scheduled this afternoon to the rippling sounds of Supertramp, a band I generally and specifically dislike. I know there are those that will see this as gob-smacking as my former distaste for Steely Dan, but man, I've tried. Supertramp just does not do it for me at all. This record, Free as a Bird, is so resolute in sound yet each song is flimsy with cloudiness: "It Doesn't Matter," "Not the Moment," "You Never can tell With Friends." Free my ass; Supertramp sounds grounded by indecision.

Philip Glass and this opera of his of which I've never before now heard will see me through. I'll let you dig into the subject matter of the J. M. Coatzee novel on which it is based. Right now, the singer and the somber adventure music reminds me of friend of Indiana Jones that is always singing in Raiders of the Lost Ark, which is another family favorite of late.

Waiting for the Barbarians: Ac...
Maybe we need some Indiana Jones Lego's next. Until then, the Star Wars ones will do and I will climb into that starship and head for the skiiiiiiieeeeeeessssss.......