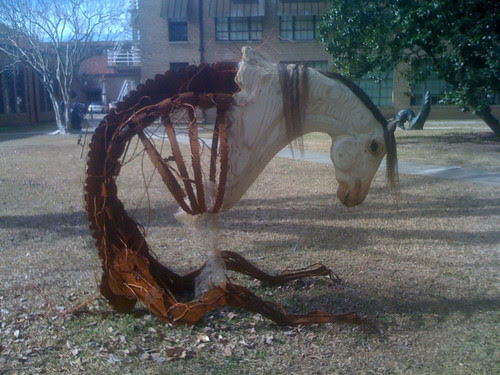 Another guy and I were circling each other to both take a picture of this horse sculpture in the area behind the art school on campus, just as I got the news about Bobby Charles' passing. Sad thing. I never got to meet Bobby, the Abbeville, LA hipster who wrote "Walkin' to New Orleans" and "See Ya Later, Alligator" and every other damn song and was cool enough to consort with the Band and Dr. John and everybody. I was always angling for a reason to go to talk to him, an article or a reference for my book - I already had a current one in the works - but I never made it out there. The sister of a coworker had Bobby as a godfather, and their mama was for a while the one that would go to check on him, to tell him "Now, Bobby, you oughta go down to the bank and cash all those royalty checks."

I love his eponymous record. Shannon McNally recorded an album of Bobby Charles covers and said in this article Alex Rawls wrote for Blurt in 2007.

"That Bobby Charles record he did is one of the best records ever made," she says. "It should be as important to the alt-country world as Grievous Angel. It's one of the top five records of an entire genre. It's overlooked because it's not really available."

I agree. It's a record that unmistakably reflects time period of its creation - it was co-produced by John Simon and the Band's Rick Danko in 1972 - but is ultimately summer breeze timeless. "What a good day to go fishing and catch the sunset in the hills."

I Must Be In A Good Place Now ...
This one is the one, though. Spaceships, autographs and salvation wrapped up in a plume of smoke.