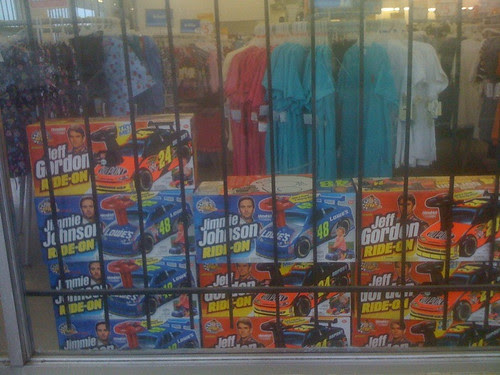 Hey, lookit me, I'm a music critic! Vampire Weekend and Dengue Fever get put through my rusty culture analyst paces. I also weigh in on cover bands and tribute shows at the 225 blog. I tackle all the important issues.

A dip into emails I usually ignore from an old list serv reaped the rewards of the Membranes, 80's post punk when punk was freshly post, formed out of snottier recesses of Blackpool Sixth Form College in Lancashire. Kiss Ass, Godhead appeared in '88 and sounds it: the drums are a rubber mallet on a cardboard box and chopsticks on a pie pan and the guitar is run to the amps via wires salvaged from rat cages. They could title a song back then.

The above photo is of a haphazard display of NASCAR RC vehicles stacked in front of the nightie section of the Family Dollar I pass on the way to the bus. Caged up and formalized like that, they and the chest-beating from both sides over the liberals failing to hold onto Ted Kennedy's seat in Massachusetts made me think of the Joseph Beuys 1974 performance "I Like America and America Likes Me"

where he holed up in a caged gallery with a bolt of felt, a cane, copies of the Wall Street Journal and a coyote. The coyote symbolically tore the paper to shreds and pissed on it but rational man and feared beast soon found some common ground. Partisan posturing seems so facile that I lose sight of who is wrapping themselves in felt and who is befouling the newspaper. What do you win when you win?