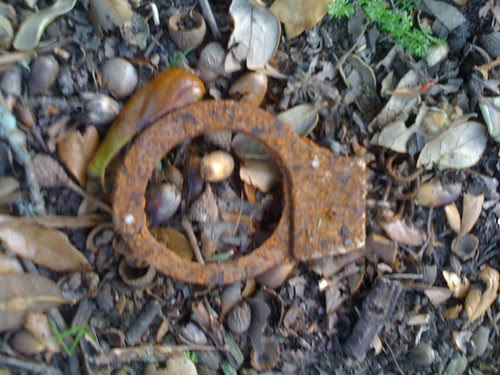 Psycho on Da Bus is like plugging your headphones into the cortex of an actual psycho on the bus. It conforms to a peculiar logic in his head, but is scary when it manifests outside.

Speaking of bus, this lone rusty handcuff was sitting in the grass by the bus stop last night.

Lala lists the Quintron album as having come out in 2012. The near future sounds an awful lot like a homemade B-52's. His gallery installation where he is recording his next album at the New Orleans Museum of Art opens tonight with what I suspect will be a bangin' reception.

Gypsohonic Disko comes about as close to capturing the current manic charm of New Orleans on the NOLA-PHONIC No. 1 mixtape, shammelessly throwing klezmer against R&B against brass bands against transgender rappers against drunk people against alla y'all fuckas, go saints, who dat forever.

And, by the way, F the NFL for reminding me that money ruins everything. I mean, I knew that already so you didn't have to remind me. They barely gave half a shit about New Orleans until they actually started winning. And as I discovered the other day, "Who Dat?" is older and more rooted in what made New Orleans what it is than the NFL ever was. So, uh... go Saints!

Phonies. That's what the NFL is, a bunch of phonies.

As for the less turbulent aspects of my fair state, sweet ol' Country Roads Magazine polled its readers for their favorite Louisiana everything in the February issue and I got to further illuminate their favorite music and venues here. My review of the new Four Tet album is languishing all dehydrated and overstimulated in the chill lounge at outsideleft.
Posted by Alex V Cook at 1/28/2010 02:11:00 PM