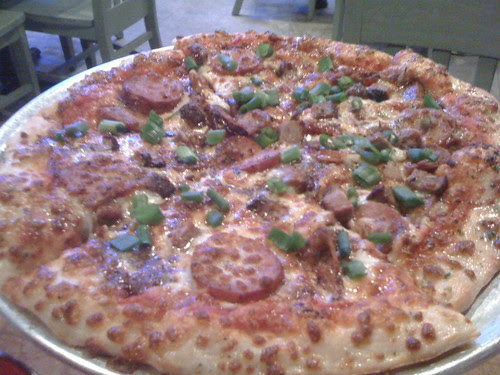 That is the Duck and Andouille Gumbo pizza at Oscar's Ice Cream and Pizza Joint, which should technically be called "...Joints" because the two are completely separate adjacent storefronts, like you have to exit one to get to the other, creating the worst possible restaurant workflow. When I first heard of this pizza, my mind said stunt food, but we needed to eat the pain away after a harrowing hour where the dog went missing, and some bullshit Evel Kinevel pizza and fancy ice cream always does the trick.

It tastes like gumbo a little and pizza a little without blowing either, nice toothy crust and it maintained its synergy cold today for lunch. It has the leg up on actual gumbo in that regard. I also had a sample of their perfectly balanced spicy chocolate ice cream once we navigated their poor planning issues - really, they moved into a brand new building... OK I'll let it go - and it was worth the circuitous trip.

Edited to add: It almost looks like a secret message is coming though the glistening grease.

Soon as the PR guy sends me some press photos I will have my long mulled and even longer-winded review of the Owen Pallett record on outsideleft to share. I can't really get over this album, nor can I the edgier and insular-er Ablehearts record. The talented loners are inheriting the Earth of my 2010 so far. Midlake puts the "mmmm" back in "autumnal" on their new record. And, God, that Eels guy. He can bum you right the fuck out, but he's such good company while he's doing it.