I had my students cover this event for the Media Writing class I teach. Much like the deal with chicken places, I hatch elaborate schemes to make people listen to weird music. There is probably a compound German word for that.

Sunday:
The Soft Pack, Strapped
Echo & the Bunnymen, Crocodiles
Bauhaus, Press the Eject and Give Me the Tape, Burning from the Inside, The Sky's Gone Out

Friday:
So Percussion, Where (We) Live
Rene Hell, The Terminal Symphony

For instance, there was a time when I might have said that obscure-by-free-jazz standards racket supergroup Circle was my favorite band. I bought a bunch of those whirly tube things from a dollar store to make the whirly noises in my apartment along with this track. I'd have kept it up even after you left.
Posted by Alex V Cook at 10/26/2012 09:20:00 AM No comments: 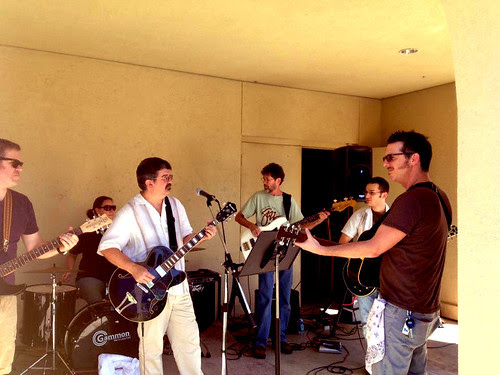 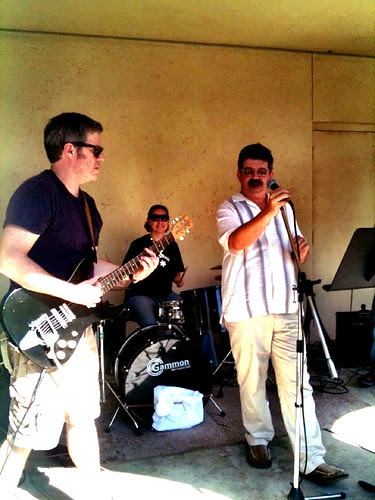 a beer and a country band everywhere 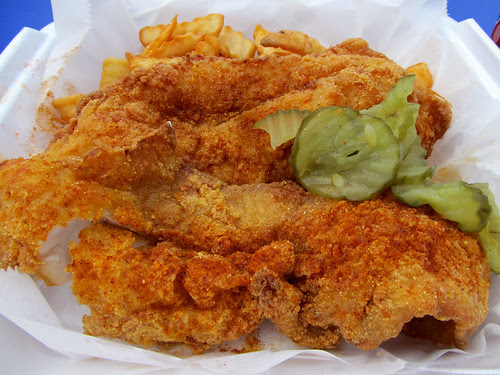 Two-piece spicy whiting from the Bolton's Spicy Chicken & Fish truck.  I had a canned peach Nehi to go with it; an inspired pairing. 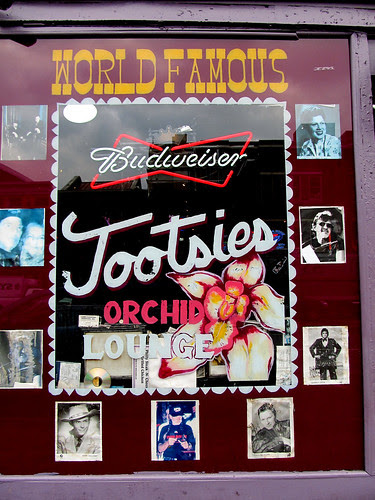 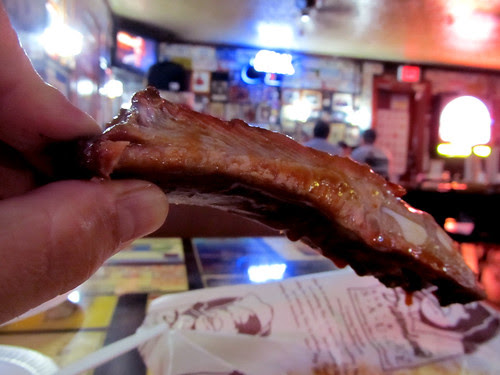 This remarkable specimen was not had in Nashville but at the original Dreamland BBQ in Tuscaloosa on the way back. When I asked the waitress what comes with an order of ribs, she replied, "Nothin' comes with nothin'." Perhaps the most profound statement made during this very wordy weekend.

Nashville is cute as a button, especilaly across the street from Pancake Pantry where you can get buckwheat pancakes accompanied by a warm syrup bottle and a waitress that might have been a backup singer fomr Tammy Wynette or something.

The festival was great by the way. 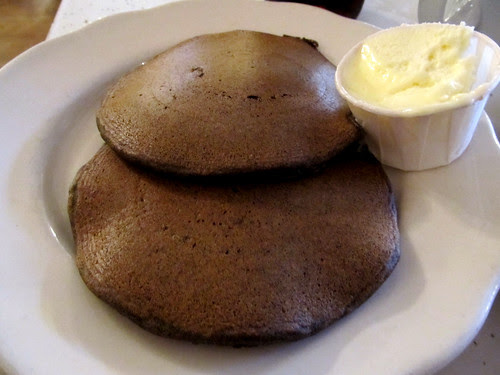 The aforementioned buckwheat pancakes. I'd show you a picture of the syrup bottle but that would border on the pornographic. 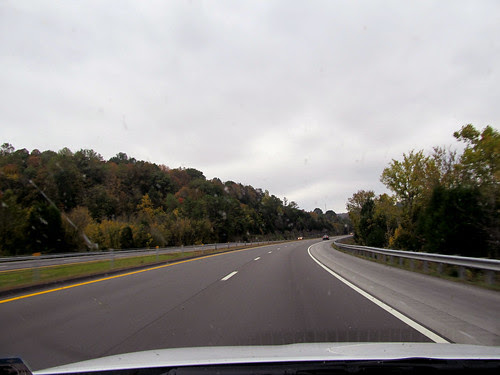 caught between the octopus and the cheesecake 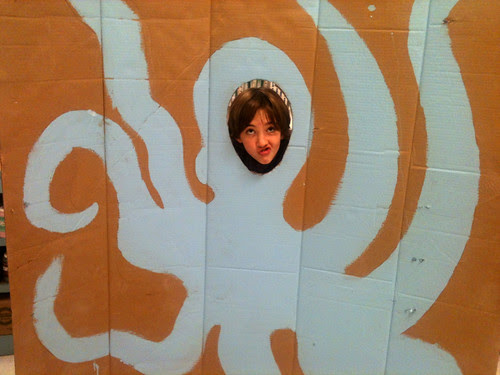 from the Work/Shop cardboard party on Saturday

Searching my phone photos for meaning, for context in which to place this day, the best I can come up with is that I am caught between the octopus and the cheesecake.

I read "The Moon-Bog" by H. P. Lovecraft last night and like every time I read a Lovecraft story, I don't know what I read, I didn't really enjoy the writing style, and yet I still kind of liked it. Maybe I just like saying "Moon Bog" in my head. Who doesn't?

I started reading the new Padgett Powell book You & Me and oh wow, oh my. That guy is doing some high trapeze art with plain old language. It might a homespun reduction of Waiting for Godot that is then built back up in to a high art that re-crumbles during its ascension to Higher Thought. It might be the rambling of idiots. It might be the earth whispering its secrets in the form of a joke. I'm not sure what it is but oh. It's good.

I don't know if I'm going to make Padgett Powell's noon reading at the Southern Festival of Books on Friday unless I drive into a time-space anomaly somewhere around Jackson, MS. I'm not saying Jackson doesn't have one; I believe to the contrary. It's just unlikely I'll drive trough it while navigating the twistiness of I-55. 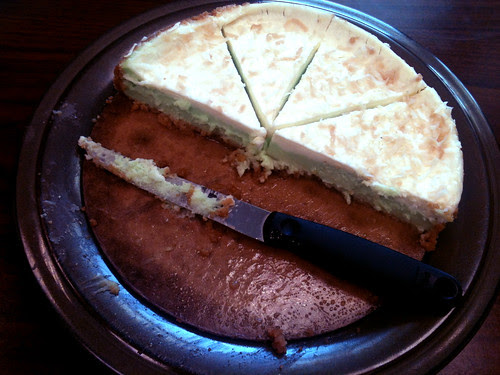 Such a pretty poster. I've been remiss in my blog-bligation due to work and more work and then getting ready for my trip to Nashville for the Southern Festival of Books. My panel with Hackberry Rambler Ben Sandmel - author of Ernie K-Doe: The R&B Emperor of the Universe - is on Saturday Oct. 13 at 3:00 p.m. with a signing shortly after.

I'm hoping to get in some pancakes and hot chicken but otherwise my low budget docket is wide open. I'd like to go browse records with fellow author/presenter Damien Echols at Jack White's record store, if his publicity people are listening.

I hated this song when I was a kid. It was everywhere.

But I like it now. I like songs that lay out the numbers  - the thirteen hundred fifty-two guitar pickers in Nashville  - and how he says "I sure am glad I got to say a word about the music and mothers of Nashville." It's a nice thing to put in a hit song.

Saturday:
is a blank spot. Not even Facebook knows what I did.

posting pictures of your meals is not journalism 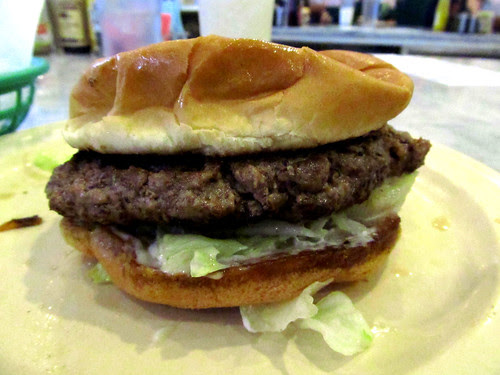 The post-symposium hamburger I had at the French Quarter outpost of the Camellia Grill after the symposium. It holds true to that which makes the hamburger at the Riverbend location so special.

"Posting pictures of your meals is not journalism" is one of the points I got from the panel discussions at The Oxford American Symposium on Journalism in New Orleans on Friday. There were a lot of other great points made. The symposium had an unfortunate synchrony with the end of the Times-Picayune's run as a daily - it starts this week as a three-day-a-week paper -  so there was an understandable amount of heat on the subject, but I wanted some cooking up of ideas to utilize that heat.

I also managed to get in a couple of good meals on Friday. 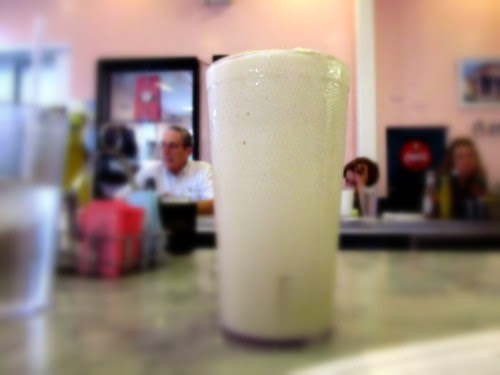 I did my best to blur out the innocent in this photo of the orange freeze at Camellia Grill, but really, it is like trying to get a shot of the Tower of Pisa without someone trying to hold it up. All apologies if I accidentally revealed you enjoying a hamburger. 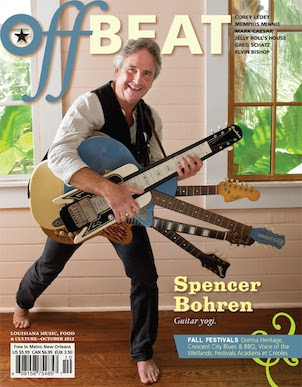 Speaking of journalism, in the new issue of OffBeat I have a loving review of the Au Ras Au Ras album, and a less gushy take on the Johnny Angel album.

In Country Roads, I detail my weekend at the deluxe cabins at Chicot State Park, help make some fancy donuts at Tiger Deaux-Nuts and try to find the right metaphor for shutters at Lafayette's alternative venue The Feed and Seed. I really like whatever this is that I do. 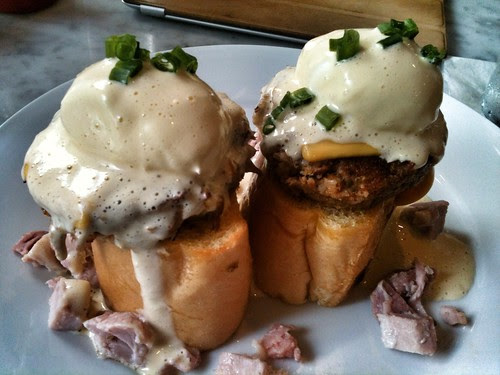 The pre-symposium Breaux Bridge Benedict at Stanley. It is as monumental  a breakfast as it appears. That's a boudin patty up in there if your were wondering.