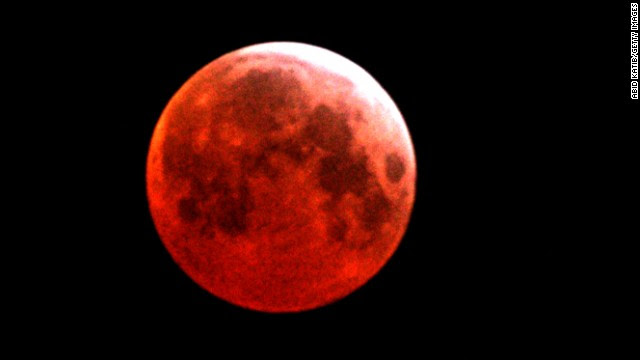 The evening's blood moon, as predicted by CNN. It is too rainy and cloudy to take it in here.

As that goes on in the heavens, I'm blogging about depressing books and weird movies!

The Metamorphosis by Franz Kafka
My rating: 3 of 5 stars

I've had a lifetime of throwing "Kafkaesque" around without ever actually reading any and The Metamorphosis surprised me in a lot of ways. It was much funnier than I was led to believe, much sharper and strikingly less contemplative than I'd thought.

It also just wasn't as good as I thought it would be. I wanted to squash Gregor Samsa sniveling under that couch long before his family did. He didn't seem all that likable as a person and maybe that's the point.

I suppose this book ushered in the European old-man-in-a-room fiction of which I am rather fond, so I should give it more props, but it doesn't hold a candle to the human roach motels Beckett and Krasznahorkai and Bolaño erect.

I wanted to like it more. I thought about reading The Trial after, wanting some deep seed for Kafka to flower in my dark heart, but I'll let him sit. Maybe a transformation will hit me one morning and I'll see its wisdom peeking out at me from the corner of the room.

Every Day is for the Thief by Teju Cole
My rating: 4 of 5 stars

This dystopic view of present-day Nigeria's infiltration by corruption is more haunting than any deep-world wound speculation. Everything is micro-corrupt, so much so that the corruptions are corrupted and there is no way for the humans living in this vision of Lagos to make it except to succumb to it, let it course through their veins like clouded blood.

Reading a book like this is like sitting on the roof of your house watching locusts swarm on the horizon. Their presence is terrifying in the distance, happening to someone else, so much so that you can't think about it when they get to your door.

Black Moon by Kenneth Calhoun
My rating: 5 of 5 stars

This was a stirring piece of perfect literary sci-fi: a straight, relatable, apocalyptic plot (everyone has chronic insomnia except for a few people), an excellent panoply of viewpoints daisy chained like the dreamless dreamworlds they inhabit, the meek heroes inheriting the shot-to-hell earth. Completely loved it.

My favorite thing about it was how it came to a stumbling end, knotted up rather than neatly tied. Quick as a fever dream. Go read it!

And as it happens, I wandered midbook into the hallucination world of Louis Malle's 1975 film Black Moon (unrelated). Wrap your brain around the trailer:

and then, if you dare, let the whole thing overtake your withering consciousness. The war between the sexes cast as an actual war, French starlets breastfeeding old ladies, black moons and scorched earths. What's not to love? Watch the whole thing!

I'm reading Cormac McCarthy's Outer Dark right now, so that should kick me right down the blackened well of the human spirit. Just look at this sentence at the end of the first chapter. Mesmerizing! It is like watching words turn into insects right before your eyes!