This top ten list goes to 11! Today is my 44th birthday; thanks to everybody for letting me hang around this long.

Rockaby is astounding: the whole sense of unconnected rhythms, the busted circle of memory, the rocking chair, the eyes going in an our of shadow, the life petering out, the glorious moment where they go "fuck life" and you are suddenly taken aback like the preceding grind of that very life wasn't enough and you wait and wait and wait until those "time she stopped" moments and they are so satisfying.

I've always wanted to like Krapp's Last Tape - I like tape machines and reels of tapes and little boxes to put the tapes in and even a botched, obscure filing system, but I never could get into it until I saw this version with Harold Pinter. Most versions overdo the stillness when it's the restlessness in the face of documentation, the muted laughter/rage against one's own ordering that kills me. I can picture old Harold Pinter going through his own files in the same way.

Beckett's short pieces are jump starts for me, quick bolts from some rusted cables locked away in the trunk until a cold morning when I can't get started, and Breath is the shortest and most electric. Say what you will about Damien Hirst, the pickler of sheep and sharks, the skull-encrsuting-with-diamonds art huckster supreme. The man can pan over a table full of garbage and make it feel like a festival ride.

I think people miss that the crushing uncertainty of where one's tick mark lies on cosmic timetable is supposed to be funny.


Quad I + II, directed by Beckett for German television in 1981

Back in college, I once convinced a bunch of students I was supposed to be tutoring in college algebra to do Quad in the little classroom we used. It was weirdly fun. I doubt it actually helped with explaining quadratic equations, nor was that really my purpose. I was going through a thing where I kept my worn anthology of Beckett's shorter plays in my backpack for emergencies of post-adolescent specialness and it turned out that this one is pretty easy and fun. Like life is when you just do it. That can't be what the old man was going on about, is it?
Posted by Alex V Cook at 3/25/2013 09:12:00 AM 1 comment:

the loot pile of a sultan's vault 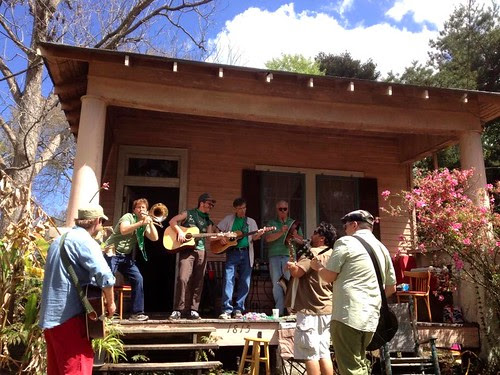 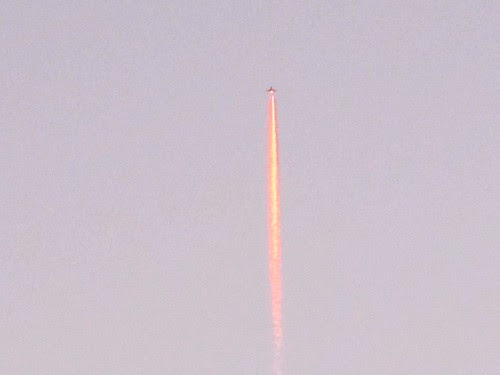 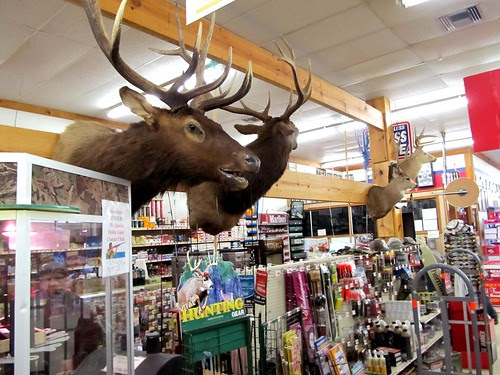 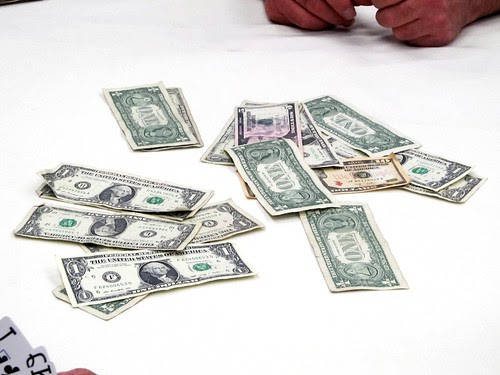 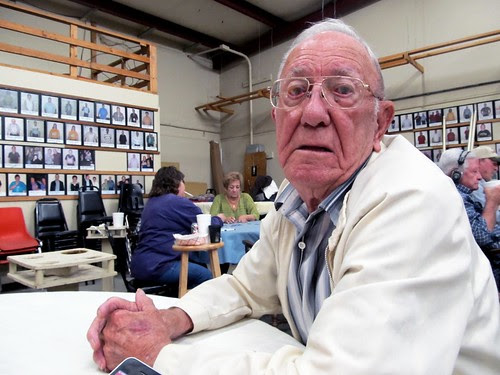 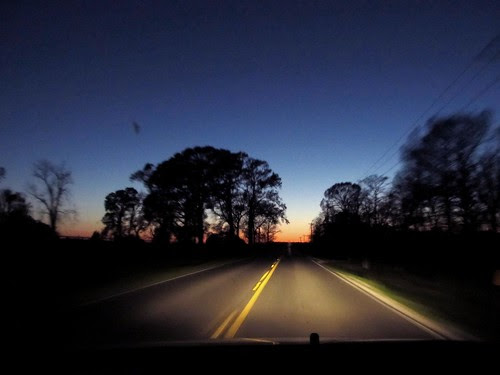 All photos by me, except the top one. I think Jamye St. Romain took.

(1) Our band played on Leon's porch after the St. Patrick's Day parade. After a couple of songs the trombone player, tambourine player (not in photo) and me (in the yard in green) walked to another party in the neighborhood. On the walk, we saw some guy stepping onto his porch with a National Tri-Cone Resonators, one of those all-metal ones that looks like it should be resting in the loot pile of a sultan's vault. We walked up his sidewalk and started playing with him on his porch for a couple of minutes and then walked on.

(2) I thought this contrail was a comet. There have been some comets recently, right? It was so striking, alone in the sky it felt like a comet, or at least an omen.

(3) I worked on a story that required three separate trips across the Huey P. Long bridge ("the old bridge") in north Baton Rouge, just before the bend in the river at Devil's swamp, just south of a turn referred to some as Free Negro Point - legend has it that ornery slaves were offered the chance to swim across the Mississippi to their freedom only to drown in the undertow. An entirely different story is that a young Ornette Coleman had his tenor sax taken from him and thrown down a hill just before he was beaten up in a bar for playing bebop in his touring R&B band, somewhere just around there.

(4) That's my buddy Clarke, a ghost in the gun cabinet at Bourque's Supermarket in Port Barre, LA. - Home of the World-Famous Jalapeño Sausage Cheese Bread. We were there, at my request, to pick up some of their world-famous jalapeño sausage cheese bread. There was exactly one ring of it left in the jalapeño sausage cheese bread aisle. I felt perfectly accommodated in this errand.

(5) One of the trips for the aforementioned story involved a bourré tournament - a Cajun card game like spades where you lose money to some of your oldest friends. I found out that bourré is pretty much only played in Acadiana, some parts of Mississippi and the Greek island town of Psara, where it is called boureki (mπουρέκι in Greek).  There is a French village in Loie-et-Cher called Bourré, so maybe that was one hop in the route. Google Maps cannot calculate directions from (A) Fordoche, LA, where the photo was taken, to (B) Psara to (C) Bourré. I can barely get to Fordoche from here. One wonders who brought the game to whom.

(6) This man got bourré-ed out of the tournament early so he sat with me and told me about the 20-foot alligator that showed up in his yard and a number of things that may end up in the story. A woman sat a little ways behind him shaking her head, telling me in a cigarette growl to not to listen to anything he said.

(7) This is just another sunset. Sunsets seem like excuses to be poetic, or to ramble, which I am doing. It  seemed like an excuse to post something besides a slideshow of record albums and YouTube videos I didn't shoot. If comets can spin by once in a while, I suppose I can do this once in a while, too.
Posted by Alex V Cook at 3/23/2013 06:06:00 PM No comments:


RIP Jason Molina. His music has always hung with me, but during one of the hard winters in Kansas City, the Songs:Ohia Axxess & Ace album was a bit of a lifeline. 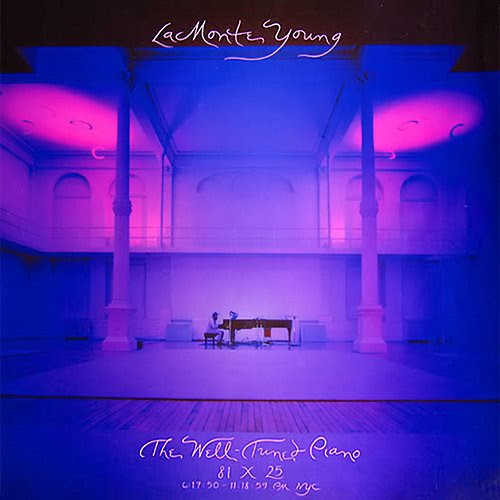 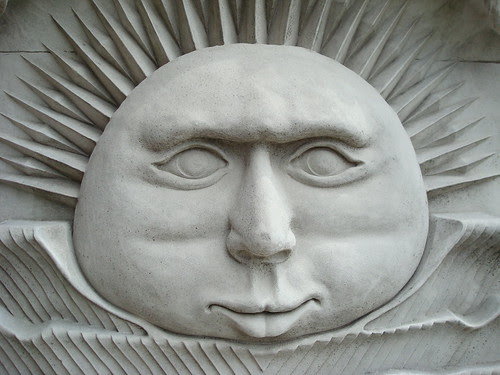 This thing haunted my dreams.

View the story "Books!" on Storify

OK, the Vine thing did not come through in the slideshow, so I looks like the only thing I understood about THE FIFTY YEAR SWORD was nothing. How droll of me!

This is the only part of THE FIFTY YEAR SWORD that I understood.