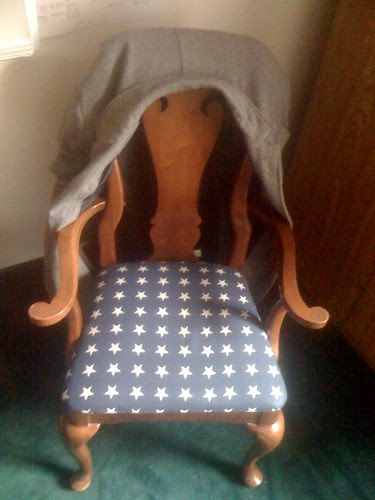 I meant to get a rare shot of Baton Rouge ice, but truthfully, there is not much of it this morning. It is comically colder here than it is in Base Arturo Prat, Antarctica this morning. Instead, here is my extra-patriotic office chair with my Chairman Mao coat draped over it. I think it looks a little like one of William Wegman's weimaraners trying to stand up in a blue-and-white stars miniskirt, perhaps as a send-up of Miley Cyrus.

Speaking of Miley Cyrus, her recent champion jane dark is doing one of the best jobs recapping the year's music. Her tastes skew markedly more pop than mine, but her smart prose is leaving me convinced I need to listen to La Roux, music I previously and callously dismissed as prattle. Also I felt for Louisiana's Le Roux; they had that name forever just to have it co-opted by a short-shelf-life Europop act. A good one, I might add, one that gets diva vs. synths right. You are supposed to be drowning in digits; obscured by those flashing club lights, but your wail comes through like that of the shouts from a collapsed building.

Back to William Wegman... I was staying at my friend's house in Chicago about 12 or so years ago. I woke up early and caught a few William Wegman segments on Sesame Street when I flipped on the TV. It seemed prophetic at the time because we were set to go to a Wegman lecture at the Art Institute that evening, but then everything seemed prophetic to me then. I regaled a group of friends before the lecture with this prophesy, one of which was a professor I knew from LSU. I smugly said seeing William Wegman in Sesame Street gave him some credibility in my book. The other guy in that small circle turned out to be William Wegman, but he seemed to take it all in stride. I think he even mentioned it in his lecture.

My friend had a roommate that didn't bathe. She wasn't there when I was, but her room was just off the living room where I was sleeping and I remember glancing in and her bed looked like it had an oil slick on it. On my walk to the library the other day, there was a similarly matted and oily gutterpunk girl sitting under a tree with all her bags and backpacks strewn in a giant protective circle, with her pit bull barreling around on a hand-braided rope. She was theatrically sewing something, making big flourishing motions with her needle, lest you fail to notice a woman with matted hair and a rambunctious dog sitting in the middle of an otherwise empty patch of grass. I liked how the flowers of LSU's Pan-Hellenic system sauntered by, imperceptibly seething at this abomination of womanhood as they understood and practiced it.

The word is that gutterpunks are all trust fund kids who do this as some sort of rebellion, but I don't know if I really buy that. I figure they are just part-time runaways and the smelly Dexy's Midnight Runners shtick is half about plumage and half about protection. Body odor is the new piercing. Has anyone written a book about gutterpunks? They are pretty new here, but have long been a fixture in New Orleans. I just wonder what that is really about.

Anyway, I love this Dengue Fever compilation. I think this might be the band covering one of the original versions on the disc, but you get the idea.