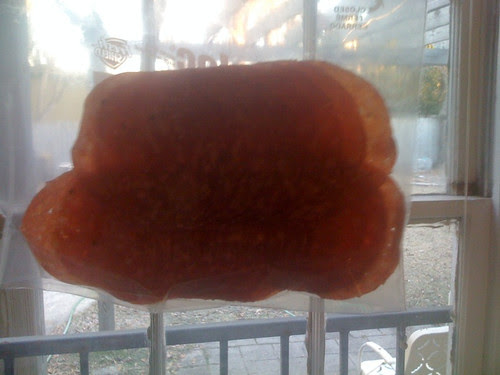 Vijay Iyer - In What language?
Spoon - Transference (streaming from NPR)

I hold the strange frozen gray Louisiana morning at bay with the luminosity of Genoa salami. My Sunday afternoon trip to buy the above salami was soundtracked by this past decades' jazz-pianist-that-mattered Vijay Iyer's collaboration with underground-ish rapper Mike Ladd and his buddies from the poetry slam circuit. Its a multi-culti affair, elegant spitting over Iyer's Mcoy Tyner meets Radiohead sonic palette. I'm not throwing Radiohead out here as a term for generic modern rock; Mr. Iyer has covered them on a couple of occasions. I came across the album while leafing through Downbeat's best of the decade story because, except for Ornette Coleman's stellar Sound Grammar, I don't know I've heard a jazz record from this decade that really knocked my socks off.

My toes stay covered under the rippling gale of Mr. Iyer's piano - and this record is nowhere as slammin' as Mike Ladd's joint with Gran Panoroamax -

but I think he's onto something. My weak egghead definition of jazz is that it's a vehicle that can take other music (blues, gospel, soul, pop, funk, acid rock, metal, etc....) to heights it would not be able to reach on their own. It's like a jetpack; maybe jazz is the jetpack we claim to have been promised. Iyer may not be putting me in the clouds, but we do have liftoff.

The cultural expanse of the record segued in nicely as I went to the Vietnamese market to Whole Foods to collect the multinational dialog that is my lunch. Phở gà dipped in WFM turkey & salami sandwiches on challah bread is where I'm at most days. Both places bring out my most immature tendencies for cultural mockery. Like, I pondered whether I could pull off sauntering around the office with this tea mug. 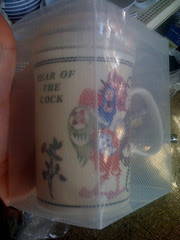 What? It is my Chinese zodiac year! I am a cock, OK? Whole Foods similarly makes me want to engage in civil disobedience. I watched the tail end of Man on the Moon, Miloš Forman's now unwatchable biopic of Andy Kaufman over the weekend. I liked the movie at the time, but now it just makes me a sad seeing how cute Courtney Love was at the precipice of her implosion. Also, they missed a fundamental point about Andy Kaufman - he was funny while making you uncomfortable. (I think) I saw that Mighty Mouse thing the first time around in 1975 and it still cracks me up.