the terminus of a walking path 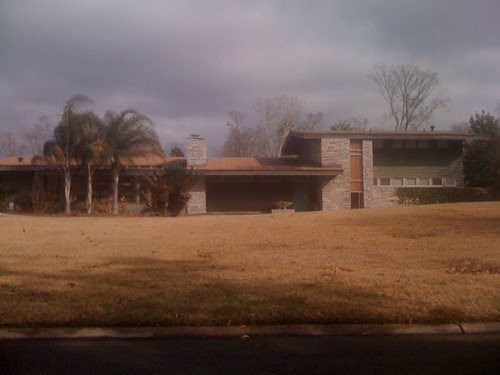 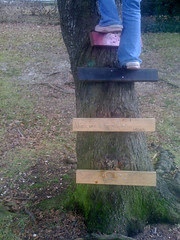 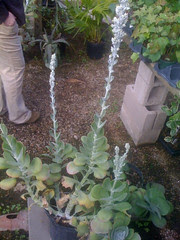 The top photo is allegedly the house in Baton Rouge that Frank Lloyd Wright designed, or his studio did it, or a student of his built it. It looks it, in that in the back there are vast expanses of slanted roof that seem leaky as hell. I knew it was in the back recesses of our neighborhood but I could never remember which street. We found it because it's next to the terminus of a walking path we intend to start using because it goes almost up to the school that Maya may be attending next year. Maya likes it because there is a treehouse of dubious ownership on the path into which I let her climb. She said there is a plank up there that said "This treehouse is owned to no one" but didn't want to take a photo of that plank when I offered her my phone. Afraid of dropping it, you see.

We both love the shit out of his voice in the choruses of this song on the Owen Pallett record.

Oh Heartland, Up Yours - Owen ...
I had a discussion about a year or so ago with someone in which I argued that you could have very meaningful friendships and communications over the Internet, but lately I am starting to think that was borne out of novelty rather than convenience, and the novelty is wearing off. The email I obsessively check is largely work stuff and subscriptions. Facebook and twitter still feel like there are people at the other ends of these pipes but none of those pipes seem to be connected. They all spill out into the same pool.

I just walked down to the record store with the tUnE-yArDs in my ear (really, this abberant caps use in band names has got to go. Now.) with that woman's piecemeal clatter songs pushing me on. Who is she recording these for? They sound like the locked loops of a busy brain, sporadically interrupted by a crash or a baby crying.

News - Tune-Yards
At the record store, the gal there was playing Black Heart Procession. She and the other kids there always play the best stuff. Not über-clerk outré stuff, but something that always makes me think, hmm good choice. The magic of the shop. I bought a CD in thanks for their smart curation of music that sexy art students might pop into a paint splattered stereo at 3am, and grabbed an Owl City poster for Maya's room.

On the way home, I listened to Fire Room (exhaust-filled free jazz rock from Ken Vandermark, Paal Nilssen-Love , and Lasse Marhaug) because I saw it on the shelf there and found it on Rhapsody. It was cool, propulsive, dangerous music that felt a little neutered in just my headphones. So here:

Broken Music - Fire Room
Cool, isn't it? But it's not the same as you and me kickin' it, going "OK, but listen to this..." Do people still do that? Did we ever, really? I suppose that is what the vinyl revolution with the kids is all about; broke-dick students gathering to communally bask in the glow of the sinning black oracle.

We had that conversation while other friends of ours were playing all the songs from Television's Marquee Moon at the Red Star the other night. It was interesting to watch the room; you could definitely tell the ones that had spent hours listening to that record in their rooms from the ones that had rightfully never heard of Television. "How long is this song" I heard one girl behind us ask, and I'm guessing a few of us were at the verge of replying "10:45" because we knew, but we didn't.

Marquee Moon (Remastered LP Ve...
This Black Heart Procession album is so somberly elegant but still at its little shriveled heart, rawk music. We have the windows open so its opium fog may waft into the sudden spring air, and yet the lunkheads next door are outside ruining it. One guy was walking by the window whistling something. Another is loudly failing to covertly do something involving a bottle of Oxycodone with someone over the phone.

Drugs - The Black Heart Proces...
That's how the Internet feels to me lately, a lot of gathered arcana like the run time of "Marquee Moon" readily available but not exactly shared. A treehouse that claims to belong to no one, a lot of people doing dumb things loudly and in plain sight, a masterwork of visionary architecture full of holes next to the rare new trail that makes you stop and explore. I should get out more.