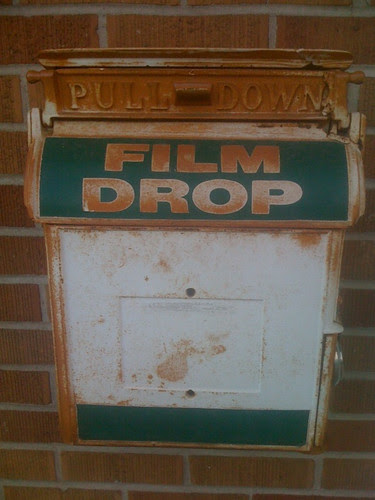 That is the film drop box outside the camera store I pass on my walk home. The idea of it seems to quaint in the face of digital photography, in how we record ourselves (those of us compelled to do so, anyway) instantly. I find myself irked that there isn't a good Blogger app for the iPhone (BlogPress is OK but I don't like how it does the pictures) so that I can write these things as they happen. I suppose as a programmer, if I were more dedicated to the task, I would concoct a way to automate the entire process, jack into the matrix and become one with my data. But then as a writer, that would be missing the point. The beauty is in the culling, in the mulling, in how you make a new scratch pie from each moment's surprise ingredients. You kill time with a keyboard so that you can puts it's head up on the imaginary wall like a trophy.

I came across a blog I really like. firmuhment is handwritten on ephemera and scanned in. I wonder if the camera store would be into me dropping off rolls of 35mm film and handwritten notes in their little drop box and posting it as a blog for me. I suspect this place is so antiquated that I might have to explain "blog" to the sweet old camera guy who processes the sweet old holiday photos for the sweet old ladies that have been dropping their film in that box for decades. He probably knows who the film is for by recognizing the kids in the photos. Plus, try explaining 'blog" to anyone. Why would you do such a thing? I've tried explaining it to myself.

I've considered the idea of doing a letterpress blog, setting type blocks on a scanner like an olde tyme newspaper and hitting the button, but I don't have the blocks or the time. I had an uncle that had a printing press set up in his garage and once I had my name in little lead and wood blocks. Now, instead, I have this.

And this is getting corny, so instead of gazing with me into 1000 digital navels, groove on the phoenix that is the mighty Gil-Scott Heron. I was listening to this new record of his as I took the above photo. There is a guy who knows how to talk about what he's talking about.