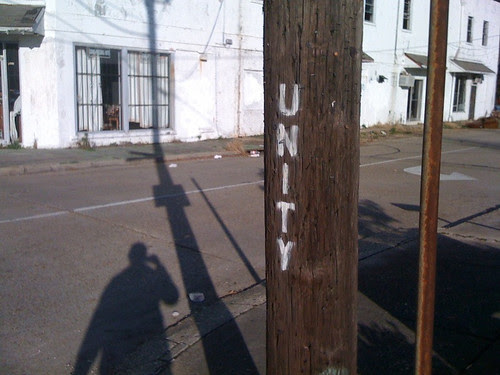 In Sunday's NYT puzzle, the clue for the three letter 52 across was "Who ___?" and I did all I could to make it "Dat" and do a whole post about it and the Saints game, but it was revealed to be "Who AM I?" which is the question on which I seem to always be stuck.

I'm as not a football guy as one can be without collapsing into a pile of paper dolls and pussy willows, but man, I really cannot believe the Saints are actually going to the Super Bowl. This is about more than stupid football, something which I've accepted is unavoidable and is not pulling away from the cultural backwaters I prefer. It's not like if LSU dropped their athletics program that suddenly the art openings and indie rock shows in Baton Rouge would be packed with frenzied fans looking to channel all those millions into something more "enriching."

The Saints going to the Super Bowl is about the weight of being Southern, corny as that sounds and real as that is (much like the above photo I snapped on my way to the bus.) Believe it or not, we have picked up on the fact that the rest of the country looks down on us, and many of us totally concur with the reasoning behind it, but we are it and it is us and if we can compete in the milieu that everybody deems so goddamn important, then either that weight is being lifted a little or we are getting jailyard strong and can bear it.

It made me so optimistic I wanted to listen to gospel this morning. Les Breatsfeeders are bringing their Quebecois garage retro blastorama to Festival International this year. Allons! Get together and believe! The song of destiny is being sung!