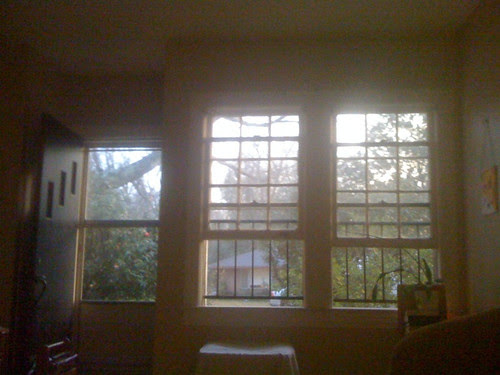 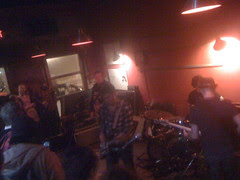 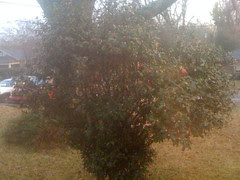 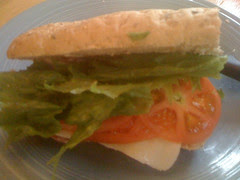 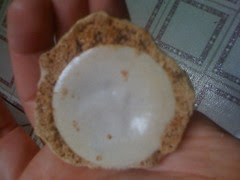 In (not chronological) order: the golden sunset streaming through my living room windows; friends of mine comprising Idiot Box, ripping the whole of Television's Marquee Moon a new a-hole at Red Star last night; our camellia tree on the verge of bloom; the framer's market bounty sandwich I had for lunch; some crazy sweet/not-sweet German cookies involving what my friend Elke said they used as the communion wafers when she was a kid.

Not pictured: the Saints! Usually I am more committed to not caring about football than I am caring, but we are so close to the real golden sunset that might just put the shine right back on sweet New Orleans. Besides, the Cardinals, the closest-to-being-local-pro-team of my youth, belong in St. Louis and are just not right elsewhere. Not that I really care, but just sayin', me an everyone else lugged our books up hill both ways a mile in the snow in Cardinals duffle bags that did not say "Arizona" on it.

I keep listening to this Owen Pallett record but I'm not sure if it is sinking in. It sure is pretty as it billows around me.

Oh Heartland, Up Yours - Owen ...
My friends doing Television sounded much more excited about it than Television did in this recording.

Venus - Television
My fellow obsessive Robert at aworks collected a number of smart things said about Julia Wolfe, so I'll let those do the talking. All I can say is: one of these pieces is for nine bagpipes! Dude!

"Stronghold Part 2" for an octet of double basses (also: Dude!) now, is a piece of music. Like you know how cool and rich and a little melancholy a cello sounds when it is simply bowed? This is like that, except imaging that bow the size of the rings of Saturn, cutting into the planet's barren surface (also imagine Saturn is solid and not made of gas) furrowing impossibly immense ravines as it passes.

Stronghold: Part 2 - Julia Wol...
And I didn't do a damn thing today, including not even make it through Sherlock Holmes: RDJ, you are the dandy reflection in the man mirror all us smarty pants wannabe rapscallions long to see, and right on, make ol' No-Shit a methed-out action hero, but quit mumbling and get on with the fights and the inventions and debauchery and elementariness**.

I did finish Wells Tower's "Raw Water" on/in "Small Chair,"* the McSweeney's iPhone subscription content app and really, it was good enough to regain the hit points I just lost for typing "McSweeney's iPhone subscription content app." I don't think I mentioned that I recently read Denis Johnson's Nobody Move in actual book form and really liked that as well (remarked upon here). This is apparently the season all the cool kids are getting their pulp fiction on.

* I wonder whether content is on an app or in it, and do we italicize them or trap them in quotes, or why not? One of many new media dilemmas to be tackled, I guess.

** Firefox's spellcheck did recognize such a word as "elementariness" which I did not know existed (I tried using "elementarianism," which does not) so perhaps our golden sunset is closer than we think.
Posted by Alex V Cook at 1/16/2010 08:25:00 PM