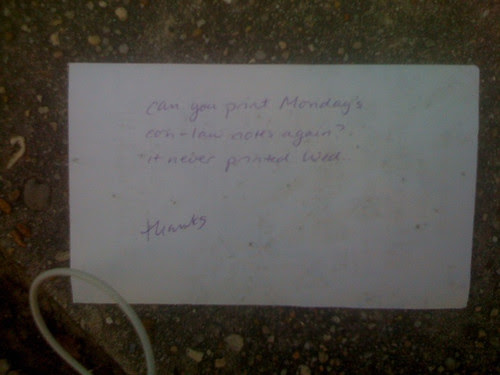 Magma is the kind of thing I like at it most egregious: lunatics whose particular exultation is so out there they need to invent a new language (Kobaïan) to say it in and push the boundaries of an already ridiculous genre (progressive rock) to express it. Thanks, Shelby, for bringing them up.

Lou Reed's "regular schmuck" records - Legendary Hearts, New Sensations, New York - are also the kind of thing I like at their most open, where a wildman touches foot on the same soil as us mortals and relates the relateable for a change. Thanks, Blurt, for reviewing it. Also, check out this excellent Perfect Sound Forever article about Reed's neglected records.

But, truth be told, these old Stan Brakhage radio shows hidden deep in the culture wells at ubu.web punch my button like nothing else lately. These are the best podcasts ever made, except they were made for the radio in 1982, listened to by about 13 people I expect, approximately the same audience population with which I've shared his abstract films. For us 13, though, Brakhage holds elusive, electric genius in his hands like Prometheus does a burning branch. These radio recording are like Prometheus walking up as you fumble with your lighter and saying "Let me get that for you."


For a guy whose life's work seems to involve unshackling the visual experience from the representational, in his writing and here on the radio, Stan Brakhage is a masterful storyteller. I'm three episodes in on "The Test of Time" but already composer Edgar Varèse's wife has told him that he can sneak a smoke in the bathroom, he related a story about the origin of the flute that involves native men happily discovering that the wind blowing through the trees "scares off the women," and James Earl Jones has freaked my shit out in a harrowing recording from a Eugene O'Neill play. Thanks, WFMU's twitter account, for bringing these to my attention.

The notecard in the above photograph was found just as Brakhage was explaining how O'Neill tried to turn the tiny stage of the Provincetown Playhouse into a brain. I just noticed the name of the Generationals album in the note, so thanks, note.