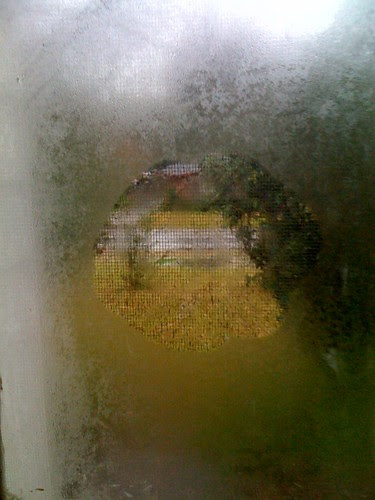 (This is actually from yesterday, back in the 2000's when everything was different)

U2 - "Bullet the Blue Sky"
Radiohead - Hail to the Thief (listen)

Both of these selections, listened to on trips to the store, were inspired from recent reading. The first was from a anecdote in the opening of the Robert Palmer anthology Blues & Chaos (which, if anybody wants to send it to me I will review the shit out of it) where the editor Anthony de Curtis talked with Bono about when Palmer took members of the band out to Junior Kimbrough's juke joint memorialized in Palmer's Deep Blues, and it made me feel sweet on old bloated U2, wanting to feel America up like an eager teenager. Plus that downshift, stuck-clutch way the guitar comes in on this song is fabulous; it feels like the guitar is accidentally stumbling into the room.

The Radiohead is because of the Chuck Klosterman interview with the band in Chuck Klosterman IV. Radiohead has become such a curious pariah in rock circles; like U2 was about ten years ago, a band that cool people were demonstratively ovah but the greater populace was/is still latching onto. For as mopey and depressing as they are supposed to be, I always think Radiohead sounds kinda sweet. Thom Yorke yearns and yearns and croons like tiny Sinatra fragments suspended in liquid plastic. And though I think Bono is sounding a little crotchety in these last couple records, he still wants it, that which he is looking for and makes him wanna run and will follow and sing that song for however long he will keep singing it. Really, my teenage years were in the 80s, we could have a worse rock pantheon than U2 and Radiohead.

But still I kept wondering why was I listening to U2 and Radiohead, as if my listening choices are somehow arbitrary. Why them when there is so much else to hear? But that afternoon, Cat in the Hat bored because of the rain, I wiped a circle of humdifier-humidity from the glass and took the above semi-pretentious picture and wondered how or if I was going to use it here and the connection just hit me: outside it's America.

Bullet The Blue Sky - U2