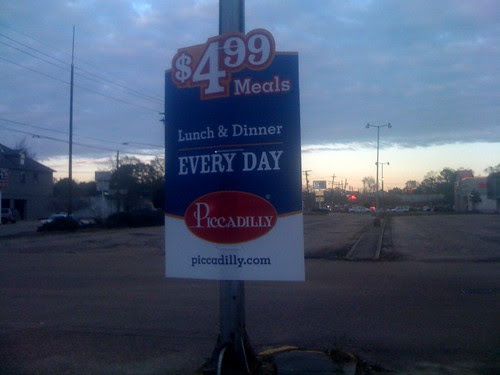 Coalesce; that's what we gotta do, baby. Forget understanding each other, eff a bunch of working in consort toward a progressive dawn; we need to grow together or into one body, that's what coalesce means. Je dig? Dig.

That is exactly how a killer disco compilation makes me feel, see the Bob Blank and Dengue Fever-curated discs for examples. It's the rarefied umbrella under which Sun Ra, Lydia Lunch and Gladys Knight can all logically huddle.

The LCD Soundsystem tune, an Alan Vega (of Suicide) cover, is the current get-my-strut-on number; I felt like John Travolta crossing the parking lot (above) with disco Suicide burbling in my head.

The Eluvium track that greeted me in this morning's e-valanche is just pristine loveliness. You don't ever hear it as much as you feel one with it.

Speaking of coalescing, it just hit me that the Piccadilly Cafeteria advertised in the above photo is the one where Henry Gray, one-time piano player for Howlin' Wolf, plays the occasional lunch gig and later that evening, Maya and I got down on some serious Lego action to Howlin' Wolf's From New Orleans album. We built some spaceships and race cars and hilariously destroyed the At-At, which bummed her out after, but man, if Lego's (and maybe cafeterias and possibly rhythm & blues) are about anything, they are growing things into one body, closing the gap between thinking and doing, and about making spaceships and race cars. Coalesce!

The practically pornographic shawarma salad at Albasha's is another fine example of high-order coalescence, though the body it grows into is mine. 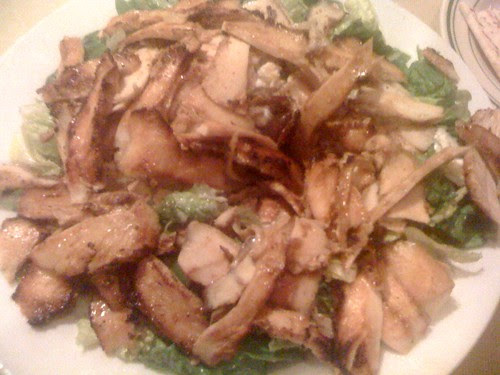