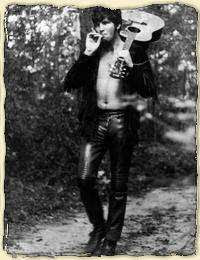 Here is the press bio I wrote for Tony Joe White's new album Deep Cuts, as posted on his myspace page.

Revered as one of the originators of swamp rock, Tony Joe White has recast a number of his classic songs on Deep Cuts, proving that time has no jurisdiction over funky. His signature groove, starting from his 1969 hit “Polk Salad Annie,” is what he uses to paint a vivid picture of the world he experienced growing up, where poverty provided unity between otherwise divided races and bad-news women were sometimes too good to pass up.

Tony Joe cut the tracks with his son Jody providing a rich palette of beats and loops, utilizing both digital and live drums, strings, organs, and the unmistakable timbre of his guitar. White’s time-worn baritone is positively haunting, like a restless spirit conjured by the funk that was always the core of his music.

As a collective work, Deep Cuts portrays the complications of living on the cusp of impending danger — be it an encounter with a brutal country sheriff or a poisonous snake — through the eyes of a master songwriter who has seen and lived all of it. Deep Cuts not only updates a cache of classic songs for a contemporary audience, it reframes them, revisiting his timeless imagery in a new, modern context. With Deep Cuts, Tony Joe reveals that there is still plenty to be gleaned from his irresistible, timeless groove.