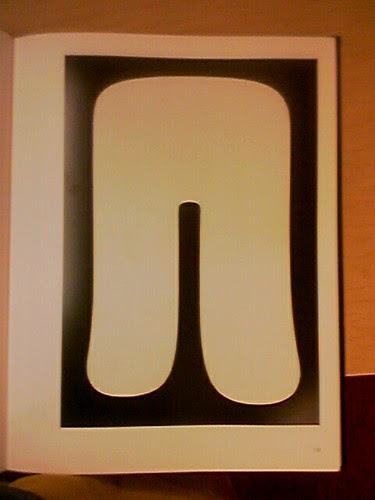 Myron Stout, Untitled (Number 3 - 1956), 1956
Oil on canvas, 26 x 18",
Collection The Carnegie Museum of Art
This painting is one of my all-time favorites. It's a simple wisp of a thing, about double the size of a piece of typing paper, by American painter Myron Stout. His is a small, unassuming catalog of work, rarely seen, rarely talked about. I bought the book this photo came from at a used bookstore, and while thumbing past the enigmatic Stellas and majestic Mangolds, this one struck.
A few years later, on my one trip to New York, I was trotting through a small gallery in the Whitney trying to wrap my head around the stunning Beat Culture and the New America show and came face to face with this very painting (or another Stout abstract very similar to it.) It was a tuning fork with a ring that cleared out all the brown paper and clutter and preening of The Beats upstairs.

This painting is like a small dog: a brave noble beast with a presence bigger than its mass. It has the reductive severity of its neighbors in the book, yet it is playful and a little yielding. I particularly love how the right leg of it is just a bit longer than the left, or if you view it as negative space penetrating the positive, negative space is hittin' in from an angle. It is square and rounded at once, emblematic and pictorial. ,yes, it looks a lot like a tooth, but I don't think that is what the painting is about.

I think Stout is pointing to the value of idealism in the personal realm, that the comb with which we force the world to line up are better used on ourselves. Also, it seems to say in that little gangly leg that everything is an exception to the rule at some level. The rule is only useful up to a degree, beyond that you are tossed in the wind like everyone else.

In western art - say from the 14th century on, painting did not take on the psychological effect of a view through a window. It is an intimate effect - it allows us to inhabit our own interior - our personal interior that is, and still have those windows, which are paintings...But I still say it's not essential. The Chinese, Japanese, Hindu , Persian, most of all, primitive cultures - in fact, no art I can think of except western European art since the 14th century has used this device. The are all non the less art, and art of the highest quality.

Expressionism; - the turning away from the traditional means of expression, and move inwardly for the sake of the personalness of a possible expression - the insistence on discovering ones own mode of expression in spite of the fact that there is a community mode of great adequacy.