[outsideleft] Matmos and the Warm Glow of Technology

Electronic music is one of the most satisfying and frustrating styles of music there is. In the first half of the century, scientists were putting banks of vaccuum tubes, spools of tape and circuit designs to create a music of the future. The reason they did this is because innovation comes strongest from the lust portions of the heart, and a number of young composers were hungry to find new sounds, new ways of crating music that broke off from the orchestra and sheet music and the same old notes. The scientists and their financial backers recognized that composers, who largely labor away their lives on an art that few witness already, would eagerly play with these toys and the innovations would come. And it did. 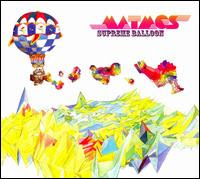 This zeal to create new art through new means spread like wildfire. Edgar Varèse fused electronic sounds and orchestras as early as the 30’s, Pierre Schaeffer made songs out of the tapes themselves in his musique concrete in the 50’s, and Milton Babbitt refitted atonalism to be created from blobs an bleeps in the 60’s. The world of sound was now open. By the time the 70’s rolled around, German hipsters embraced these electronics and ran the ragged petals of flower power’s aftermath through their oscillators and filters, fusing the chrome future with the caveman stomp. Music was now jacked in and what did we do with it?