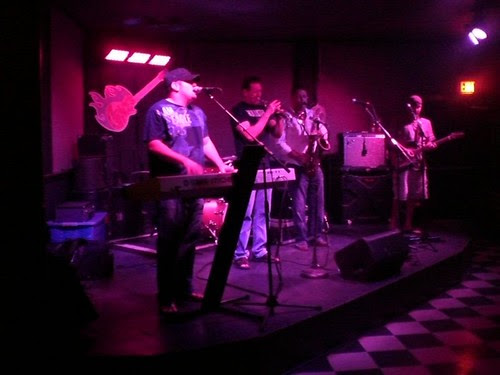 In the June 2008 issue of Country Roads

I try to keep an open mind about music, recognizing that, of course, everyone has their own tastes and likes the music they like for completely unique reasons. But I can’t help but cringe a little at the oldies. Nothing against the songs, they are great songs and have earned their longevity. I just wonder when we are going to move on and create new classics and put these relics in the attic. I wonder why so many people cling to the same music decade after decade, music that was off the radar before they were even born.

I got an answer to that second question on the way to Grace’s Lounge in St. Amant. I forgot my usual stack of CDs on the counter in the kitchen, and was left in the static somewhere past the city limits where the signal for KLSU, the LSU college station, petered out. I set to scanning the dial—landing on a “new country” station. I was transfixed by how bad this music was to me. Dull cheesy clichés spread on over-processed slabs of sonic white bread. The songs all seemed to have the same themes: men trying to convince a listener that never asked that they are still a cowboy of some variety, women offering up preliminary atonement for being the object of those very men’s desires. Country music was once the last stronghold for humanity at its most hilarious and heart-wrenching; this bastardization had all the grit of an ad for expensive sunglasses.

I was heading to Grace’s to hear Foret Tradition, widely considered to be the best swamp pop band going. The problem was I’ve never gotten a good definition on what swamp pop really is. What separates a swamp pop band from a regular variety act? Swamp pop seemed to me to be a nebulous term for music, pointing more to a place of origin than something intrinsic to the music. I pulled into the parking lot of Grace’s, struck by the lack of a big sign with a logo; just a rented sign that listed Foret Tradition and a number of regional rock acts. This did not bode well for pinning down a Unified Theory of Swamp Pop.

“Well, you know when you hear music from New Orleans, and you know what it is?” said Grace’s manager Brandon Moran. “Swamp pop is like that. It’s music from the 50s and 60s dance bands with a local flair.” Moran operates the club that was first opened by 1974 by Grace Vasseur, as the live music venue it has been ever since. He books a variety of music at the club, reflecting the changing face of Ascension parish, but Thursday nights are all for swamp pop. “I grew up in a house where my parents danced to swamp pop,” he explains, listing Mike Broussard & The Night Train band and Kane Glaze & The Coozan Band as some of his parent’s favorites.

Foret Tradition kicked into their horn-laden upgrade of bar-band classic “Mustang Sally,” James Spells’ trumpet and Ryan Foret’s soulful growl injecting some of the Wilson Pickett swing into the song that has been worn down by a million bad variety band covers. The women in the bar dropped every conversation and immediately broke into one of the most spontaneous line dances I’ve ever seen. As the song blazed on I started to see some defining edges to this thing called swamp pop. It wasn’t about the songs themselves; it was about how and where it’s played. Foret Tradition tore through classics like “Domino” with an injection of Crescent City Funk and blare from the horns, making these old songs rise like a wave only to crash when they reach their fever pitch.

Slim Harpo’s classic “Ti-Na-Ni-Na-Nu” set the checkered floor into a jitterbugging frenzy, couples flinging and twirling in every direction. I’m used to seeing older couples demonstrate how a rug gets cut at Cajun dance halls, but I was shocked to see how well the younger people in the crowd knew the steps.

I approached Mallory and Courtney, two young women in their twenties, as they exited one of the evening’s many synchronized Electric Slides. I asked them why two young women were so into a batch of songs nearly a half century old. Mallory blurted without hesitation, “This is my kind of music. I was born and raised here and this is what we listen to.”

When I asked whether they practiced the dance steps, Courtney offered, “No way. I learned them from growing up here.” My last shred of skepticism about how ingrained this music was in the culture here was eliminated when I said, “OK, what CD is in your car stereo right now?” And they responded by pointing to band and saying in unison, “THIS ONE!” They quickly disappeared into yet another flurry of twirling bodies, leaving me to realize that I may still not know what swamp pop is exactly, but I have a good idea of who and where it is.