It's only playlist wasteland 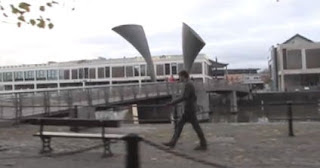 Scout Niblett - "Nevada" from The Black Cab Sessions
The Black Cab Sessions, if you don't know already, are a series of online videos of a band or musician performing a song in the cab for the duration of the ride. Scout Niblett is my fantasy rock 'n' roll crazy ex-girlfriend. The insular drone of these riffs trapped in that cab are perfect. At one point the cab rolls back to stalk a guy in a suit and watch him cross a bridge in time with the lyric put on that suit and lend me that costume. Serendipitous, or at least seeming to be.

Armitage Shanks are far more punk rock than the rest of you deadbeats. While it doesn't have quite the first-record-bought-with-my-own-money nostalgic power, the first song I ever heard on a streaming web radio station was Armitage Shanks on some garage rock ShoutCast station, and that convinced me at that moment internet radio is brilliant. So, contact your short-sighted congresspeople to keep them from ruining it like they do with anything else that's cool.

Click Save Net Radio for more info in how to be a hero for America and The World!

The Pogues - If I Should Fall from Grace with God
I'm poking A Drink with Shane MacGowan by him and his wife Victoria Mary Clarke with a stick as it sits on my nightstand, and it is largely corny and terrible except for these handwritten parts by MacGowan, esp the forward where he describes a vivid dream of chopping up some women in all in perfect Irish adjectival manner. I wanted to listen his album with the Popes, with that "Whiskey,

Whiskey..." song but this record will totally do.

I saw Shane MacGowan and The Popes in Cincinnati with my friend Joe eons ago. He strutted out in a trucker hat, mirrored aviators, a gas station souvenir shirt form Alabama and, I believe, a Zima. It was if he saying, you know this is what you all look like to me, right? During the intro of one song, he couldn't get his lighter to work, so he sat off on the drum riser through the next two while the band rattled on. You could feel the seething of the rest of the band radiate into the audience, where some creative souls near us saw fit to start a fight to all this Irishness, and if memory serves, Joe and I broke up the fight. Or really, Joe broke up the fight and I tagged along for support. I spent the rest of my night bumming cigarettes because the venue didn't sell them, and drinking my way to the train two days later.

John Martyn - Bless the Weather
John Martyn is rather sublime. Right up on the edge of being overblown. My friend Rod is a decade older than me and grew up in England wanting to be John Martyn as a kid. We started talking

about guitars, and having not played in ages, he pulled out his guitar and laid down a stunning, sexy even, version of "Bless the Weather." It was like that moment in Buffy the Vampire Slayer when the kids discover Giles doing a killer cover of The Who's "Behind Blue Eyes" at a coffee shop gig - didn't know he had it in him.

Neil Young - Mirror Ball
I'm not sure I've ever listened to this, his 1995 dalliance with Pearl Jam subbing for Crazy Horse. Back then the only thing I wanted to listen to less than Pearl Jam was a Pearl Jam side-project. I still don't really want to listen to Pearl Jam, but I will say in their favor, they tore it up on that second Lollapalooza tour, momentarily the greatest rock band in the world blasting through "Baba O' Reilly" in the humid New Orleans afternoon, even trumping Ministry playing with thunder and lightning in the background. "Truth be Known" is a delicious bit of hard rock

pudding, barely formed beckoning you to lick the spoon deftly chased by the quote "I think I just fucked up. Let me play the groove for a bit..." before they do just that on "Downtown"