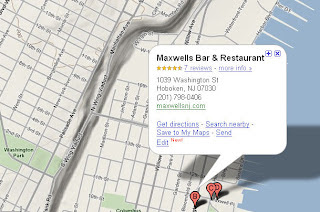 This post from WFMU's Beware of The Blog contains a snippet of "The Hoboken Sound"a documentary about this very thing, here is the torrent file for the whole thing if yr into it

The Individuals - Fields/Aquamarine
This showed up in the mail last night. Not to be confused with the Chicago stoner rap crew of the same name, The Individuals were one of the first of the early 80's Maxwell's set from Hoboken (according to the press kit, they lived around the corner from the Maxwell coffee plant for which the club was named) , from which spawned Yo La Tengo, The Cucumbers. That was a sweet time in underground rock, when the dream of saving rock 'n' roll was embedded in every jangly strum.

The Cucumbers - All Things to You
This 2004 reunion record is all I could find, but it has the same sing-song sweetness I remember from this charming little band back then. They always struck me as a little like the B-52's with less beehive, and more honey.

The Bongos - Drums Along the Hudson
I let this burble in the background while working, occasionally trotting up to the foreground. It was good, without really bowling me over but I was struck by a statement in the aforementioned documentary clip: "Bands from Hoboken seem to always be smiling on stage" and that totally comes through.

The Feelies - Crazy Rhythms
is not available by any of my usual methods. Didn't they reunite? Where's the giant reissue edition? C'mon people.....

Yo La Tengo - Ride the Tiger
as inevitable as Sinatra when you are talking Hoboken. My friend George is still pissed at Yo La Tengo for overloading their Tipitina's show last year with atonal jams instead of happy, snuggly, bittersweet Yo La Tengo, preferably songs Georgia sings. I personally think YLT has kept up their part of the bargain, keeping the smile-on-stage Hoboken sound alive throughout their catalog.

Gutbucket - Sludge Test
This is not the Hoboken hometown heroes Gutbucket, but instead self-described "free-range" punk/jazz/rock combo from Brooklyn. Worlds apart in sound, but they at least come across like they are smiling.

Frank Sinatra - Tone Poems in Color (from the massive Concepts collection)
Like I said, Sinatra is inevitable when discussing Hoboken. I was compelled to seek out the weirdest Sinatra I can find. I couldn't track down his 1968 pop/rock attempt Cycles, but I did find this. Tone poems is 12 tunes by noted composers based on the poetry of Norman Sickel, all bearing titles like "Red" and "Silver" conducted by Frank Sinatra. Not sung, mind you, just conducted. Such is the allure of The Kid from Hoboken that he doesn't even have to sing to make it his.
Posted by Alex V Cook at 5/08/2008 09:16:00 AM