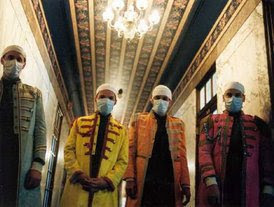 Paul Burch sometimes comes off like he's defending his thesis in Texas swing, but his take on it is a good one, maybe the best kind you can do now. There are plenty of country swing acts still reeling around the country in bolo ties and matching hats, but Burch made his own music through his love of Bob Wills and Charlie Rich on his stop at Chelsea's. He's the rare example of an artist who has actually learned from history rather than just be content to mimic it. He seems to like it here since this is the second time he's played here in eight months. If you have half a dance step in your repertoire and a tumbleweed or two hidden away in your soul, you owe it to yourself to check him out next time he blows through.

Liverpool's Clinic is another group that makes interesting hash of the psychedelic, punk and garage rock they love. The band explains the new album, their influences and the deal with the surgical masks in the May issue of 225 (and grinds it out at Spanish Moon on Saturday.)

Also at the Spanish Moon this week, Oakland's Subtle brings their saturated electronics and underground hip-hop connections (Subtle's Doseone is one of founders of the Anticon hip-hop consortium and member of the critically acclaimed cLOUDDEAD).

I sent a message to NYC all-female Slayer cover band Slaywhore, a while back, challenging them to a battle of the bands against our own Harptallica, a female Metallica-covering harp duo, but they apparently don't have the stones to respond. I guess the General Theory of Metal (Slayer is better than Metallica) doesn't hold true in the female cover band arena. The hometown girls will shred their victory by default this Thursday at North Gate Tavern.

And while we are talking about metal, I'm a little miffed that Laplace death metal group Rougarou stole the name I was reserving for my own secret swamp doom project. They did manage to get theirs off the ground and I didn't, so to the victor goes the spoils of a Friday all-ages set at The Darkroom.