First impressions are everything, they say. My first exposure to Jamie Lidell was on a magazine cover, where he sported two sets of glasses at once: one pair of black thick frames tight against his scruffy pale face, caught in a countenance that mixed mock surprise and faked orgasm, the other sunglasses in identical frames hanging lower on his nose. It was a terribly unnerving photo; I wanted to smack both sets of spectacles off his face. It was enough for me to forgo any conscious dealings with Jamie Lidell. Fortunately, a copy of his soul techno monster Multiply flew into my headspace, sounding like an oldies station blaring out of passing car, Doppler effect funk. It reminded me of the later insular funk explorations of Prince in that it misses the greater social point - funk is about movement en masse, not personal spelunking – in favor of its own slightly paranoid internal mission. It contains vast resources of fat synths and polyrhythms compressed into a small volume, as if to create unbelievable pressure. The hit “A Little Bit More” is an ironic declaration, considering Lidell sounds like he’s about to collapse under his own weight in there. 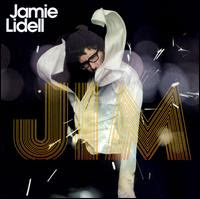 Jim is his follow-up where he strips down to the silk boxers of his Motown fetish, standing there as just a man. The beats and production are clipped to the quick, his roaming eye and identity crises have given way to being The World’s Best Boyfriend. On the opening track “Another Day” bluebirds pull back the covers as a refreshed Lidell bounds out of bed declaring the morning to be another day, another way for me to open up to you. It is as if Motown was bought out by Lifetime. Yet the brash positivity of it all, the brazen declaration of openness is so frank, it’s compelling. I’m used to soul songs being about “I’m sorry I lied” or “I know you’re lying” not “let’s talk about our relationship.”

“Wait for Me” seemed like a step back from this, with his tales from the road and how hard it is for a man to be away so long. Instead of using this as a segue way into begged forgiveness, it is a plea for her to wait for him. The inversion of the soul-song relationship dynamics is as unnerving as his Spartan groove is compelling. Even when this positivity goes overboard, as it does in “Little Bit of Feel Good” when he blurts the asinine line please don’t let my feel good go away over a James Brown-minus walking groove, you are willing to go overboard with him. Like his photos with the two sets of glasses on the magazine, I really want to hate this, but he wins me over, not by trying to change my mind, but by offering that we work this out together.

Things really gel on the ballads. “All I Wanna Do” feels like a lost classic, the strings and thudding bass falling far backstage from Lidell’s Otis Redding rasp. What many neo-soul arrangers fail to grasp is that this music’s caress is a light but complex one; you have to convey a lot of emotions while appearing as economic as possible for a soul song to really sink in, and Lidell nails it on this one. Even as he exposes the click track on “Green Light” like Timmy Thomas did on his 70s minimalist soul hit “Why Can’t We Live Together,” while also attaining a Stevie Wonder-grade build-up, Lidell keeps the song reigned in to an intimate scale. My first impressions of Lidell were way off base. Jim is a triumph of soul expression from an artist that reveals more and more with each look, just like any good relationship. Now if he’d just shave and lose those stupid sunglasses….