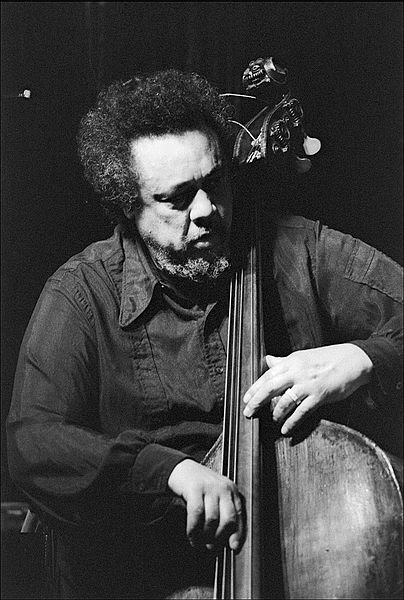 Java Man is the name given to fossils discovered in 1891 at Trinil on the banks of the Bengawan Solo River in East Java, Indonesia, one of the first known specimens of Homo erectus. Its discoverer, Eugène Dubois, gave it the scientific name Pithecanthropus erectus, a name derived from Greek and Latin roots meaning upright ape-man.

Arguably the most profound upright bass player ever, going from the classy to the feral in one wide swing, Mingus had an equally acute dexterity with the language in his titles, creating uncomfortable moments that released their venom over time.

Referring to himself as the upright ape-man, if that is what he's doing here, sets up a great linguistic quandary for the largely white audience of his music. Do we dare make anything out of the use of "ape-man" once it is discovered? Is our making of that connection underscoring our own inherent racism? By putting it in Latin, are we simply obscuring it from view? Notice how I am hiding behind "we." We all know what "we" we are talking about. Mingus is so good at making me feel so comfortable in his swing and then slipping the knife between my ribs.

So let us slink deeper into our Jazz darkie-fetishism, until we get to the strutter's ball. Put the words "barbecue" or "fish fry" in the title of a Jazz or Blues song, and I will immediately love it even before hearing it. I could say it is because I love barbecue and fried fish more than anything in this world and not be lying, but that would not be the real truth. The real truth is that I am like David Sedaris' dad, who harbored fantasies of going to Jazz clubs in Harlem, "consorting with negroes into the wee hours" I love the black invasion of white culture that Jazz has about it, even though the white audience is the one systematically keeping the invasion at bay. One of the ways it holds in the tide is by underlining the trademarks of the culture, fish-fry's and barbecues, Afros and raised fists, reducing black culture to those things.

Emerson String Quartet, Complete Works of Webern, Disc 5
I went to the library at lunch to both find the book for the Myron Stout post and to look up the exact Sedaris phrasing, which I could not find. I could've sworn that was in Dress Your family in Denim and Corduroy, but nope, and the other Sedaris books were

checked out. Webern is perfect music for introspection, contemplation and research. Webern took the mathematics of Schoenberg and stripped the Romanticism from it, reducing the music to events happening in time, and then reducing the elements and time to the the sharpest state where it is still music.

This is the nature of analysis, I think, reduction until something of it makes sense. Of course when you reduce something, you might get at its essence (or at least an essence) but you no longer can see what the thing really is anymore. Its the natural and maybe unavoidable instinct of a culture that considers itself dominant over what it perceives. This trick to getting out of this hole is questioning the nature of that dominance, removing as many layers of the bullshit that goes into that until you get to an essence of what you are really talking about.
Posted by Alex V Cook at 5/15/2008 09:44:00 AM