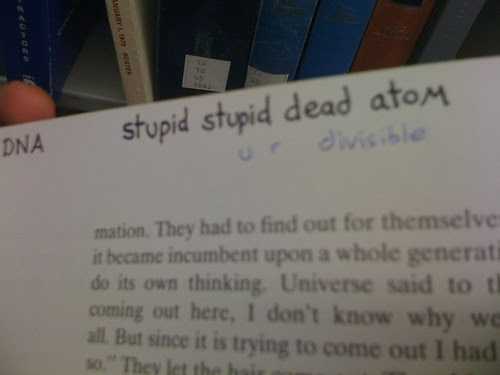 I am doing some last minute after-the-fact-checking for a piece that I am so squealy excited about that I think it's better I keep my mouth shut until it appears... but anyway, I came across the above enigmatically lettered notes in one of the texts. I actually never write in books because whatever I write is usually stupid and doesn't help me or the next poor slob obsessed with my current obsession. Plus, there is the tug to madly dash comments in the margins like Yes! or even simply ! and that kind of cheerleading only helps the author, who will likely never read your notes. I take pictures of text with my phone and if I was more indebted to my techno-cleverness, would invest in some OCR scheme to rip the text. I could pretty much write a Davis Shields book on the toilet with that set up.*

Anyway, I really like how the darker remark is further remarked in thin blue pen, perhaps by Prince (before the purple thing) during his undergraduate years studying experimental architecture (which would explain a lot about Prince).  I also like this thing on another page that blossmed a Seventies-child sweetness in my heart when I saw it. 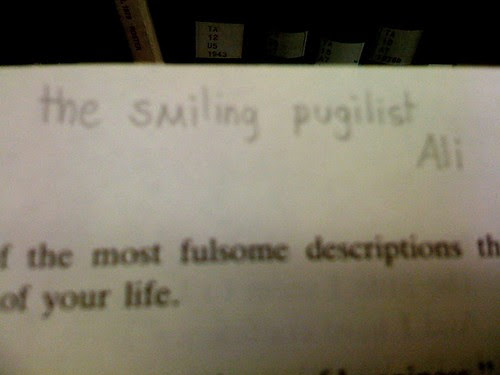 The most fulsome description indeed!

I didn't give a rat's ass about sports and I still loved Muhammad Ali. My sister-in-law, who has amazing stories, like stuff that mere mortals do not, was once embarrassed by one of her children when he said "Tell him about when you met Muhammad Ali" and she was all, "Now why would he want to hear about that?" to which I still reply !

Also, while I'm talking about the writer business, I was thinking on the walk over to the library about an interview I have to do tomorrow. It's with someone for whom I have some ferocious admiration and was inventorying my anxiety about what I should ask and countered my own question with: well, what do you want to know?                                  !