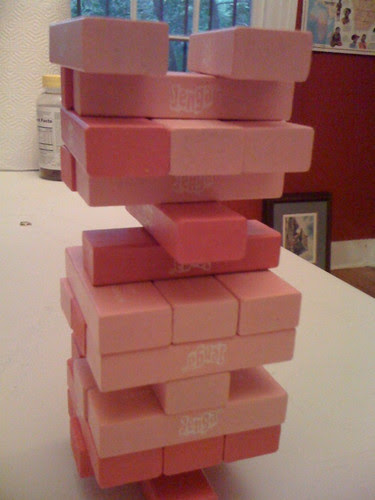 Anubis, the jackal-headed mummy god,  appeared while playing Jenga the other night.

Scott at pgwp, Clarke, and Calexico fans respectively have rarely steered me wrong, so I pass their suggestions on to you, dear reader.


Here he is in our shared hometown of Houma, LA tearing up Nick Drake's "Been Smoking Too Long."

I really dig Dax Riggs.  I think he gets it right. I interviewed him early on in my tenure with 225 and mentioned his voice reminded me of sitting in our apartment in Houma (we lived in the ones behind K-Mart; he and his mom in the ones by the mall, roughly at the same time) playing my mom's Neil Diamond records while ostensibly watching my sister and he kinda sounds like that. He looked back wide-eyed and said with conviction "I love Neil Diamond."
Posted by Alex V Cook at 8/04/2010 01:57:00 PM