a heartbreaking anecdote of staggering amusement 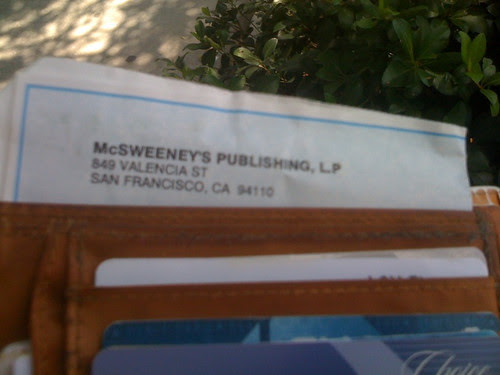 Don't get too excited.

Yesterday I saw this check from a noted cool publisher poking out of my wallet and thought I should post a picture of it in a cocky, oh this old thing?, way even though it's was for a $30-kill fee for an article that won't be appearing in one of their fine publications after all, and thought better of the notion. I instead took $30 as $30 and deposited it at the ATM in the Union and moved on. Then, not two hours later I see this on Facebook:

and smacked my head over the missed opportunity of having Dave Eggers sign my check from the company he founded with maybe a "Better luck next time. Ha ha."or something. It would have been a heartbreaking anecdote of staggering amusement, and I'd probably have framed it, or laminated it and used it as my go-to bookmark or something, supposedly like Einstein did with a $1500 check he'd won for something, except Einstein did it out of pure ether-wandering, absent-mindedness, and subsequently lost the check when he lost the book. I would have been tempted to be horrible about it, making it a forced conversation starter (like I am doing with this post) so it probably worked out for the best.

I didn't make it to Eggers' appearance. In true Baton Rouge style, nobody ever mentions when something cool goes on and instead fills the gap with complaints that nothing cool ever goes on. I found out about it only hours before the event, my wife started her night class last night and for a moment considered making my daughter sit through it but then it would've required the organization some slapstick vehicle trading-off business and then there's dinner and her homework and the dog and the only book of his I've read is How We Are Hungry and I didn't exactly love it and they don't have Staggering at the library even though I look every time and it was going to require a lot of maneuvering just to possibly make a perfectly good check into a novelty. Friends of mine with impeccable taste swear by Staggering and What is the What, and I like the parts of Zeitoun I've read so they are all on the list

Someone else on Facebook said it was " inspiring..." so, cool. I hope it was a packed ballroom.