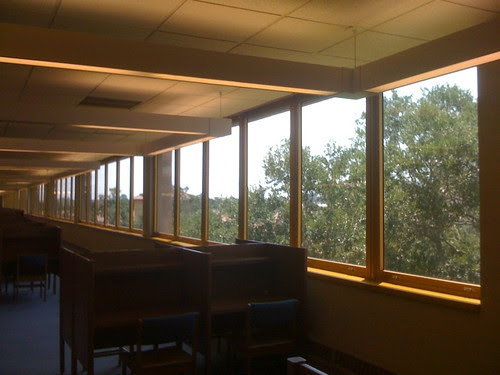 I love the library. Just sayin'.

I've never heard of Cotton Jones either - they have a new album out - but it's great stuff, like if a band got stuck coming out of the experimental time tunnel and decided to just play sweet, sexy songs right there in the lab to woo the favors of that one demure lab assistant whose charms went unnoticed by her dull compatriots, hellbent on finding the Answer rather than succumbing to the Question.

The UVB-76 thing is from this story: basically one of those crazy buzzer stations that just puts out little pulses over Russian shortwave channels for decades suddenly changed. I would like to interview the people that monitor these channels. I don't know what for, but the findings will be important. I feel I should be monitoring them, but after five minutes I lose my nerve. I'm afraid I'll never stop. I did, however, once put a bunch of the Conet project recordings on an iPod and listened to it on shuffle all day, so I'm picking up what they are laying down. Try it yourself, comrade.


Recordings of number stations. Somewhere in here is the one that inspired the Wilco album title Yankee Hotel Foxtrot.
Posted by Alex V Cook at 8/25/2010 12:33:00 PM