I'll do anything for love 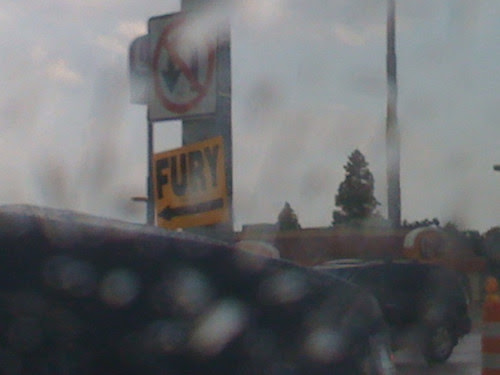 Fury is but a short distance from the rain-besotted strip malls on Siegen Ln.

I can only guess it was the influence of having read this not long before falling asleep in front of the TV, but I had a dream last night in which Diablo Cody appeared standing naked in a doorway, not in a salacious way at all but in an incidental, Renaissance painting, "Oh, me? I hang around naked in doorways" way. I don't know if it was really her - I don't exactly have a clear picture of what she looks like clothed or otherwise, and there were no tattoos, which she has a lot of, right? But in the dream  I knew it was her, like I think I said, "Oh look - Diablo Cody" or something like that. I think it might have also been Peregrine from Work of Art, but it wasn't really her either. Either way, disappointingly tame for a naked-moderately-famous-person dream.

I finished My Bright Midnight last night. I am too close to the author I think to do a publishable review - we were friends in college and this novel was published by the same press doing my book - so I'll say what I'll say here: It was really good. The short novel traces a rather sprawling tale of a reluctant German immigrant in New Orleans at the tail end of WWII. It does an excellent job of not being too New Orleans-y while still being totally there; in fact its geographic arc from the city to the coast and back drew a light-pressured sketch of the landscape similar to that found in Walker Percy's The Moviegoer. The protagonists in both have distanced tethers to the world in which they live, but instead of wandering in the wonder, our man in Midnight finds himself wanting to swim but bobbing in the eddies of inaction, of deflection, only to discover his stroke when the water gets rough. Past and future grow blurrier as the story proceeds, until they finally don't really matter at all when he accepts the present and only then does the foreigner become resident, the transplant take root, the backstory give way to a life.

Midnight was a nice break from dark-hearted Jewish apocalypse tales, but I am back on that horse again with Shteyngart. There was an excerpt of Super Sad in that contentious New Yorker 20 under 40 issue that bowled me over, so I can't wait to sink into the whole thing. I got into a discussion about jangle pop as the real sound of the suburbs as opposed to the idealized version as projected in the new Arcade Fire record. The Reivers were put forth as the shining example of suburb rock, though Fountains of Wayne seem to fit that mantle as well. I said suburb rock is "about dreaming about possibilities rather than grasping them."

I love the Go-Betweens without ever really wrapping my heart around them. You should read the interview with founder Robert Forster in the recent issue of the Believer. My daughter is pacing behind me humming something that sounds exactly like the synth line in "Wishing" by A Flock of Seagulls. She's looking over my shoulder as I type this and asked that I use the "largest" instead of the "small" font for the caption. I'll do anything for love. I should probably get to work.