give Gaddis a go 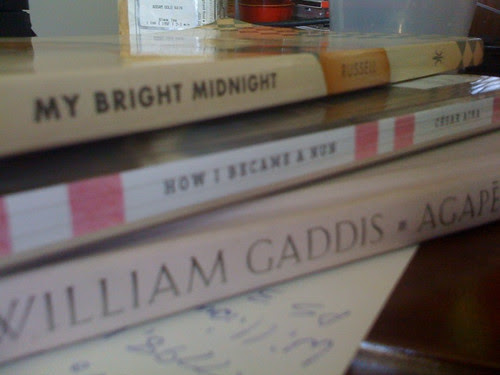 Piling. Doesn't one moor oneself to a piling?


This little thing in the Observer about experimental writers got my blood flowing, and made me decide to give Gaddis a go. Like one of the small ones; after Witz (review forthcoming) I am taking a break from taking on monsters like Gaddis's JR or The Recognitions. I have a copy of The Corrections sitting unread on our new artfully book-piled living room tables (thanks John Michael and Chris! Good luck in Massachusetts!) and most of Ulysses on my phone should I need to get adrift in the vastness any time soon.

Anyway, I dug the bit of Gaddis I choked down with my lunch, esp this:


"If Beethoven could be heard by us today, playing his sonatas" lucky he was deaf he'd, blood on the, look at that, arm right down to my hand veins look ready to burst no more tiny felt-tipped wooden fingers no, see what breaks your heart?

What breaks your heart? That is a great editorial question.

Much of the part of  Agapē Agape I read is ate up over computers and their history combined with the loom, and how those working those looms in dim factories were "continually struck in the stomach by the shaft of the roller on which the cloth is being wound" - that quote extracted from a  letter Flaubert penned to the loom manufacturer Jacquard - and that hits Gaddis in the stomach a century or so later. Fair enough, computers are kind of the devil that greases the wheels on which grace travels, BUT as I tried to check this book out, I got a notice on the little kiosk that I was barred, after just having paid a lingering fine to the university at the bursar's office. The desk clerk informed me that without a written receipt I could not get unbarred, to which I informed her the bursar asked that I remedy this fine via computer to avoid printing a  paper receipt. I considered walking away and trying to check out a book of Kafka stories instead to see what bureaucratic mayhem that would generate just as my phone buzzed and in the email was my receipt. I handed my phone to the clerk who then handed it to the man behind the cubicle wall with the button that unbarrs and boom, I was free!

Great story, I know, but the point of it and maybe also of experimental literature is that the system works sometimes by not working enough that it forms a double negative, and works.

Josh (Russell)'s book is nowhere as complicated as all this, at least not at first, but already gave up a great little line in the first paragraph:


We were matching orphans in patched pants.

I picked up a César Aira book as this article and its recomender recommended I do but haven't cracked it open. The system is fragile enough today.
Posted by Alex V Cook at 8/02/2010 01:16:00 PM