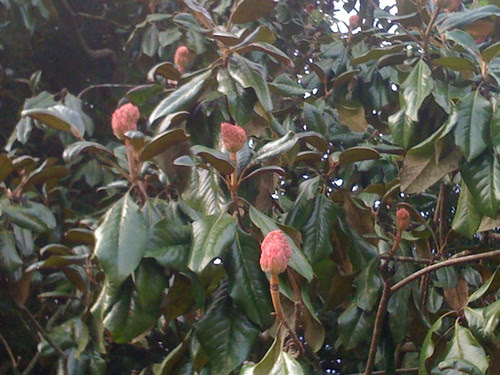 Big Star, "September Gurls"
Pearls Before Swine, These Things Too

Media announcement: My review of Josh Cohen's daunting mega-novel Witz is up at outsideleft. He "vivisects the contemporary neutering of the mystical by letting its details pour out on the ground like a roadkill’s guts."

On the way back from walking Maya to school on the little greenbelt path next to the house that isn't a Frank Lloyd Wright house after all, I was singing "September Gurls" to myself, except imagining it slow and cataclysmic, lonely echoes in a mountain castle with an overdriven amp and crackly, spotty generator power style. Then I heard and immediately saw a demure woman pass me from behind silently on a bike and felt self-conscious about singing. I tried to re-establish my synergy with the Universe's crackling electricity by snapping the above picture of magnolia pods and while doing so, stepped in some fire ants, getting my shock.

If it will load, you should look at these pictures of what happens when you put a glass jar over the hole in a beehive (via Boing Boing) and you'll see what I'm after today. Like in the song below, I don't want to escape from reality; I want reality to escape from me.