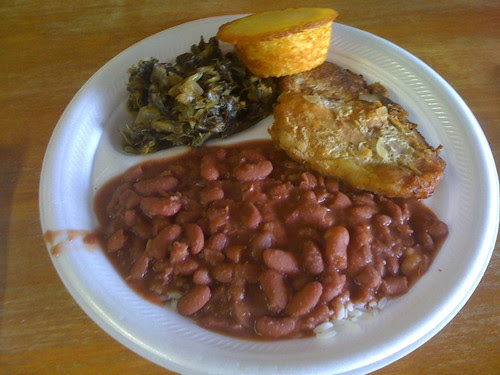 Ladies and gentlemen, the baked pork chop special at Zeeland Street Market. I would be just as happy to go deep into a giant bowl of those mustard greens but the chop and red beans and rice bring it all into focus.

I swear I do not have a promotional deal going with them, but I would not be above such a thing were it to be placed on the table next to a Styrofoam bowl of greens. Just sayin'.

A meal like that should only be followed by the closest mustard greens music at hand. I'm wondering if/hoping that this number by the prolific blues guitar impresario Tampa Red (he's got 15 volumes of this stuff) features a kazoo or better, a tissue-and-comb.

She's Love Crazy - Tampa Red
Evan Dando is always good for a cover tune but I guess I never realized old GG Allin had (at least acoustically) a tender side. This GG Allin ballad would be right up Patterson Hood's alley. Which reminds me one of one of the all-time greatest Trucker tunes, about said balladeer.

The Night G.G. Allin Came To T...
My wife and I were listening to the latest Drive-By Truckers record to and from lunch and were wondering how Patterson Hood still manages to find such immediacy in his songs after all these years. They are right there sitting next to you, or at furthest, down the block a ways in that beat up-looking house, where all that shouting comes from sometimes at night.

Drag The Lake Charlie - Drive-...
A friend of ours is up in the hospital on dilaudid, and it reminded us of this other crucial tune from their undersung early record Pizza Deliverance.

Margo and Harold - Drive-By Tr...
More I look at it, more I think this record is my favorite of theirs, nailing their thesis to the barroom door better than Southern Rock Opera or The Dirty South even. I mean, it's a close race, but this one is the one I end up thinking about the most.

I'm going to settle down with Holy Modal Rounders before I start thinking too much., maybe play along if I can find a tissue and a comb and some mustard greens.