roosts for birds that foul dreams 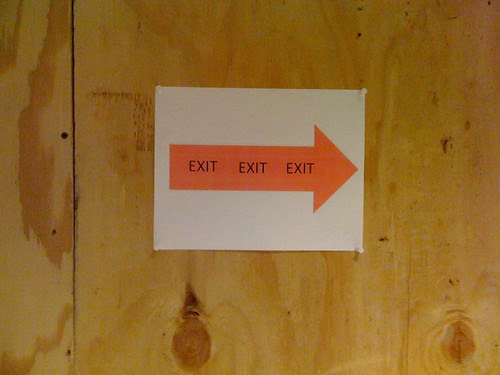 The subtitle of the latest cha-cha-ka-boogie, hallucinatory dispatch from Mississippi Records is “Thematically vague…more of a mood piece,” which applies universally here. And jeez, no matter where a stream of consciousness leads, the sudden presence of Townes Van Zandt is always startling, standing there in wet boots. A different version of this song appears near the end of side A of the Shombolar tape.

And y'all, Kenneth Patchen is a badass. I never knew.

HOW GOD WAS MADE

on the seventh day
His sweeping eye saw what had been done
and moved into the great, gentle face
where not even He could see its terror

I was aware that Bern Porter was a badass; I used to have a copy of the book, The Last Acts of St. Fuckyou, from which this piece is brutally torn by the author, like meat from a kill.

I don't know if any of this poetry can hold up against the exit sign I saw posted on a temporary wall of the still-being-reconfigured LSU Union after lunch. Something in how the three "exits" are not lined up, an almost imperceptible stepdown. The way out is down. This sign directed me to a freshly sheetrocked room with nothing but some shady looking elevators and sliding outside doors that thankfully worked. It made me think of the Winchester Mystery House (be forewarned of auto-music) and of House of Leaves, and made me wanna get the fuck out of there.

This all took such a bum-out, anxious turn that the careful brooding of the National are comparatively a ray of sunshine. Happy National Poetry Month!
Posted by Alex V Cook at 4/23/2010 01:43:00 PM