The latest dispatch from the alchemists 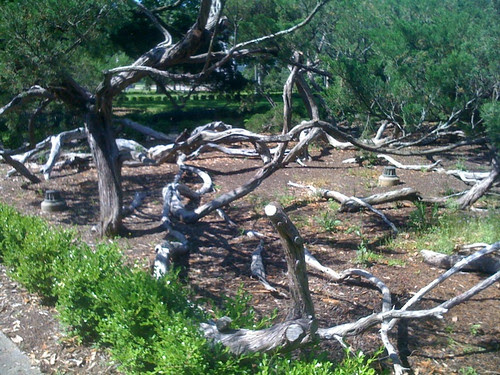 Earl Kim is was just the best. If your brain cobbled together a contemporary music ensemble with memory on the strings, existential dread on percussion, and stray thoughts on vocals, every piece they attempted at their sparsely attended afternoon recitals would devolve into sounding like Earl Kim. It would be just me in the audience and that weird old man that goes to every performance until I become that weird old man.

The above twisted garden of the damned, actually a pruned patch of trees on the Louisiana State Capitol grounds, is where I would like to sit lotus-position with my iPhone tucked into a fold of my soft saffron robe, with old Earl at barely audible levels (where he's best) with even older Earl looming above, and commune, commune, commune.

Here is an excerpt from Kim's Earthlight, one of my favorite pieces ever.

The latest dispatch from the alchemists behind Mississippi Records is equally good. Dream songs all the way.

As for the celebrated new novel by Sam Lipsyte, I just started it and already the guy got fired. For funny, even possibly virtuous reasons, but fired all the same. That will snap you right out of things.
Posted by Alex V Cook at 4/30/2010 01:07:00 PM