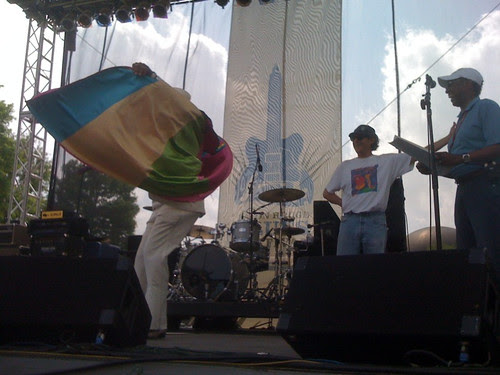 Stevie Wonder, Songs in the Key of Life (1976, lala)
Baton Rouge Blues Festival
The New Pornographers, Together (out in May 2010, streaming at NPR)

Above: Teddy Johnson - cape-wearing blues superhero and proprietor of Teddy's Juke Joint - giving the crowd a taste before being honored at the Baton Rouge Blues Fest. I'll have more to say on the Festival in my Wednesday 225 column, but in sum, it was a success and even made me forget that I gave up a JazzFest pass for the day My Morning Jacket was playing to groove it down local.

Here's me with the honorary Mayor-President, key-to-the-city-holder backstage. One of my favorite people. More pics up in here. 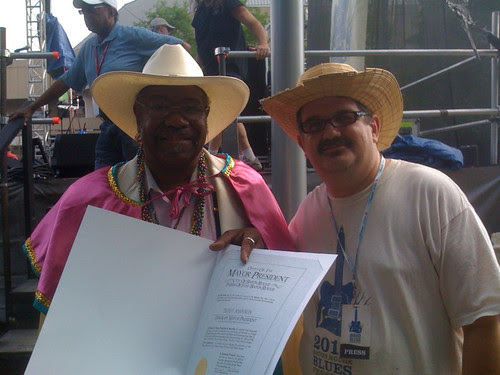 Even Trolls Love Rock N Roll -...
but I did get Ruthie Foster doing a soaring cover of Lucinda Williams' "Fruits of My Labor"

and this guy throwing down to Sonny Landreth's "Promised Land."

Here is Sonny Landreth milking a Rush moment at the festival. I mean Eric Clapton has proclaimed him the best guitar player alive or something like that, but who takes God's word on anything anymore? Behold. Also, I love how the stage looked with the dome of the observatory bubbling up to the left prettied up with the fountains. Baton Rouge cleans up nice when she wants to.

My weekend was otherwise loosely soundtracked by Stevie Wonder's Songs in the Key of Life, an album in which I hear new things every 5 years or so when its pulled up from the well. For instance, I've heard "Contusion" plenty of times before but holy shit, I didn't really grasp how dense it is until I heard it in the car on the way to the festival

Contusion - Stevie Wonder
It's like he heard Emerson, Lake, and Palmer and decided to show them how to really do it. Not that it ever needs inspiration, but this bout of Wonder was brought on by this T-shirt at this place on my block. 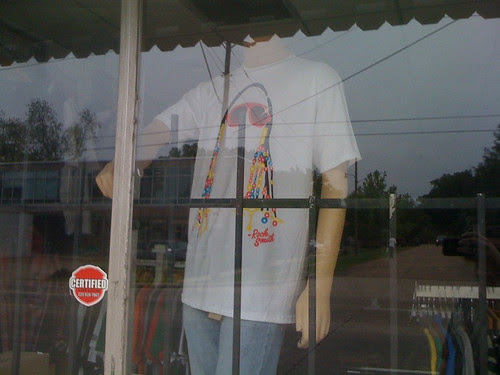 Also on deck is/was the new New Pornographers, which rocks a little harder than their past efforts (good) but might be too "Jesus Christ Superstar" for my tastes.
Posted by Alex V Cook at 4/26/2010 09:00:00 AM