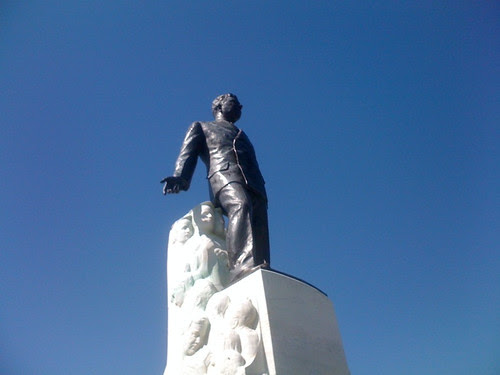 I've been working my way through Alex Heard's investigation of the 1945 death sentence of Willie McGee, particularly trying to wrap my brain around his general history of lynchings in Mississippi and Louisiana, and this poem bubbled up elsewhere with eerie timeliness.

The bloodhounds look like sad old judges
In a strange court. They [point their noses
At the Negro jerking in the tight noose;
His feet spread crow-like above these
Honorable men who laugh as he chokes.

But I know one of my hands
Is black, and one white. I know that
One part of me is being strangled,
While another part horribly laughs.

Until it changes,
I shall be forever killing; and be killed.

Typing this with David and Fatboy and Florence of the & the Machine's disco opera about Imelda Marcos chirping in the background seems hopelessly absurd, but what is disco's true purpose if not to commingle the grandiose and the absurd in way that makes it all go down smooth? How do you make a lynching not seem absurd?

Here Lies Love - David Byrne &...
I suppose embracing grandiosity is the only way to overcome existential absurdity. We popped down for a walk around the state capitol grounds on the nice day that was Sunday. Huey P. Long's tomb is there, looming in the photo above, about to break into song before the stately capitol building he called into being in his 1928 gubernatorial campaign. He was assassinated in one of its hallways in 1935. 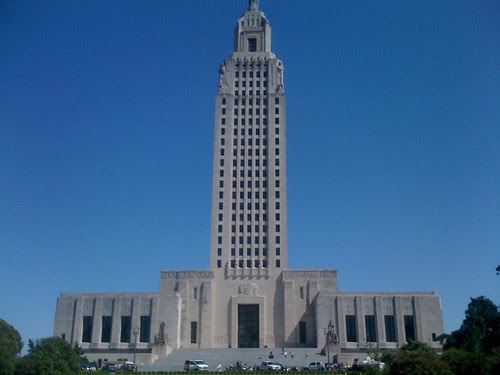 The marble base of the grave says

Here lies Louisiana's great son Huey Pierce Long- an unconquered friend of the poor who dreamed of the day when the wealth of the land would be spread among the people.

We reach disco liftoff with Alice Russel at the mic.

Men Will Do Anything - David B...
Philip Glass does his Buddha best to come off humble in Glass: A Portrait of Philip in 12 Parts as we are taken through the machinations of his life. It's interesting to watch this after recently getting to meet him and watch him in his element with musicians here; the film is pretty true to life. Everyone around him here, myself included, had a little squeally "Philip Glass is talking to me!" in his presence which we tried to keep suppressed to stay on keel with the self-deprecating bemusement with which he carries himself.

Here he was at the master class conducted at the LSU School of Music, introducing, discussing and listening to a performance of his 1+1 for One Player & Amplified Table that I just now got around to uploading. There are a couple more to put up once permissions can be granted. I'm not even sure I have full permission to do this one, nor can I isolate the thread (if any) running through Imelda Marcos, disco, Huey P. Long, lynching, and Philip Glass, but my intention is like the will of the dead Kingfish, that the wealth of the land be spread among the people.