now, that is the meat 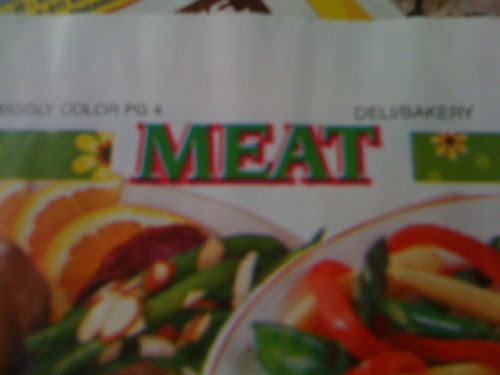 Even as an unashamed contemporary adult, I just can't get cozy with adult contemporary. I like the sauce just fine but it drowns the meat. The word meat peeked out at me yesterday in the flyer from the new Piggly-Wiggly down the road and I figured some opportunity would arise for which its image would be useful.

William Lee, now, that is the meat. He was wandering around the Bonnie 'Prince' Billy show at Bourque's last night in a baseball cap, cradling a cardboard box I suspected contained a mummified cat or something along those lines. When I wandered over to the bar next door during the show, he was there with one of the aforementioned dimebags of beefy jerky before him. I asked hopefully, "Was the box filled with beef jerky?" but to some mutual disappointment, he handed me a CD instead.

It worked out, for I am here to say William Lee's album is wilder than a box of either beef jerky or mummified cats. Rock 'n' roll at the crossroads of literate and haywire. The Fall on a bellyful of tainted cornbread, the Grandpa Jonestown Massacre, the man-baby of Julian Cope and Micha Blue Smaldone. It's what I want my band to sound like when I get cool. He's aimlessly wandering from Los Angeles to some shadow destiny point in Alabama; one does not arrive in Scott, LA through purposeful wandering. You should have him play your backyard cockfight or halfway house social if he passes through.