he doesn't bury his subject in myth 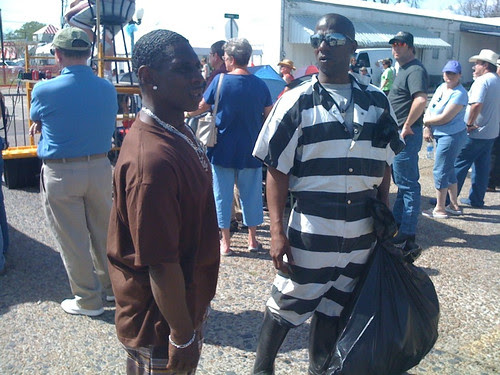 Media announcements: I applaud the success and question the timing of the Baton Rouge Blues Fest in this week's Record Crate blog for 225 Magazine.

In the May issue of 225 Magazine proper, I review the latest albums by locals England in 1819, Jim Hogg, and We Landed on the Moon! (exclamation theirs, but they are exciting enough to warrant it)

I sing the rock Ameri-lectric in my review of the latest albums by Titus Andronicus and the Red Krayola for outsideleft.

In the May 2010 issue of Country Roads, I review the River Road hideaway Roberto's and tell the tale of drinking a beer in the Jerry Lee Lewis House and Tony Joe White's performance at Delta Music Festival in Ferriday. The above photo is of one of the prison trustees mentioned in the article. Also, I sneak in a brief review of Joe Bonomo's Jerry Lee Lewis: Lost & Found:

The scandal and the album become fulcrums in the see-saw portrait Bonomo paints of Lewis, but neither stand in for the man. Lewis left the fifties with as much fame as his wild persona could handle, and he played it with the same ferocious virtuosity as he did the piano, only to find he had to climb back up the country side of things when the bottom fell out. Bonomo doesn't shy away from the gory details, but he doesn't bury his subject in myth either. A welcome rarity among books about rock legends, Bonomo lets the music and the history do the actual talking.

I,I,I, me, me me. Thanks for reading if you still are. Tip your bartenders! Here's a couple of videos of Tony Joe from Ferriday.