stand tall to the wind in your tattered rags 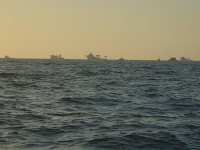 The above was shot by a guy I've known since grade school who is now a geologist headed out to the Deepwater Horizon site. I don't mean to be an enviro-alarmist who believes his own outrage is key to addressing massive issues, but it is a little eerie how little is being said about this here. It's on the news and everything, but there's none of the ground chatter one might expect. Maybe we are just now so accustomed to Louisiana falling apart that setting the Gulf of Mexico on fire sounds reasonable, even kinda cool. Just sayin'.

I love Sam Amidon's album of folk songs, art-music-augmented by the Most Clever Boy on the Internet Nico Muhly. I like it even more than the Jónsi's album touched by the same collaborator's hand. There is a Nick Drake quality there, more than the "it sounds acoustic so I'll say Nick Drake" aspect the dead singer's name usually evokes.

Way Go Lily - Sam Amidon
Hazey Jane II - Nick Drake
But it is the resonance of folk in it, the stand tall to the wind in your tattered rags stroll of folk music that Amidon nails on this record. It is the kind of stuff that will make your forget for a moment that the water is on fire, then suddenly remember.

I See The Sign - Sam Amidon
I dunno. I've been eating less in the style of Henry VIII and suddenly (but not) dropped from an XL to an L in shirt sizes. My XL's look like loose billowy tents rather than ones stuffed with stacks of meat, and that causality is sobering and exhilarating and you think hey, OK!, and then there's things like the oil spill that are all , oh...ok. Philosophy is so much more fun when there's no skin in the game.

And neither are really what I'm thinking about, or are just part of it. My book's come a-knockin', a friend of mine has cancer, and the wheel of time is still rolling, flattening the proud declarations I've made about not believing in chaos under the twin steamroller rollers of cause and effect, and someone I knew when I was my daughter's age now is charged with solving the chaos of causality out in the water.

Anyway, great record. Here is a bit of Mr. Muhly's own dazzling work. Especially check out that third video where a camera was set on a sushi restaurant conveyor belt.


Nico Muhly, Skip Town performed in Toronto in 2008 by the composer