what the wheelbarrow was telling me 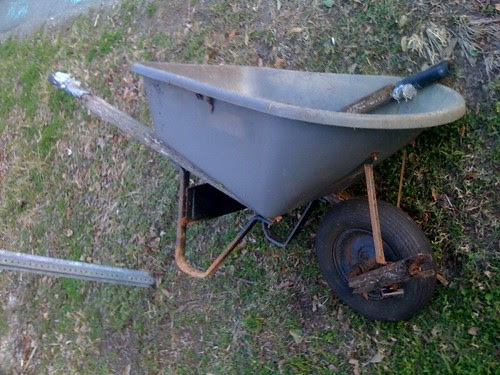 Is there any significance that can be gleaned from coming across a broken wheelbarrow while listening to a song called "Wheelbarrow Man" and carrying one too many bags of groceries? I've been watching an awful lot of Criminal Minds lately (Did they finally run out of Law & Order's?) and something like this usually leads to the solution of the case, only to be capped off by a tidy quote.

Wheelbarrow Man - Julian Cope
Right before it happened, I experienced an unusual urge to hear "Everybody Wants You" right then, and the reason I have an iPhone and Rhapsody and all is so I can set my groceries down right there on the bike path and address that need.

Everybody Wants You - Billy Sq...
You'd think Billy Squier was all 'bout the riff, but a wordy dude lurks behind that little Stratocaster strut of his.

Say goodbye to conventional ways
You can't escape the hours, you lose track of the days
The more you understand, seems the more like you do

Maybe what the wheelbarrow was telling me that I need to focus less on my usual (escape) route: the obscurities (like the semi-gibberish of both of these wonderful Julian Cope records) and embrace the mundane, carry my shit down the middle path. The more you understand, seems the more like you do. Except that I don't understand.

Or maybe, maybe it just meant I was carrying too much and I could've used a wheelbarrow, man. 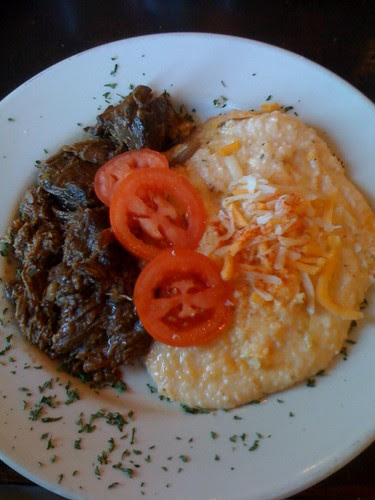 This has nothing to do with the wheelbarrow: I had the Creole Grits and Grillades - sour cream and cheese grits and succulent pot roast topped with a line of fresh tomatoes - from the brunch menu of Bistro Byronz, and it's just the best idea.
Posted by Alex V Cook at 12/27/2009 07:38:00 PM