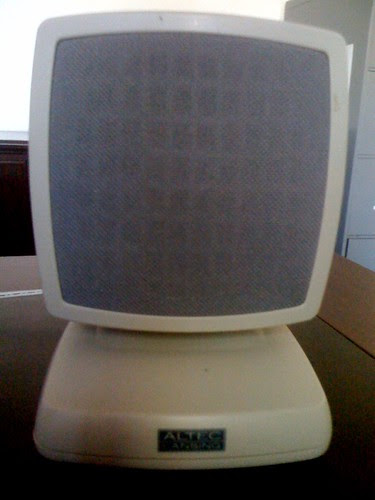 I've been feeling a little squirrelly about the blog format, among other things so change it up. Instead of a dull row of album covers, here is a context sensitive photo of the the speaker on which I heard the Final Fantasy live concert. Expect a lot of architectural details of my office, what I ate for lunch, and campus scenes in the posts to come.

I like the idea of what Owen "Final Fantasy" Pallett* does immensely, accompanying himself on looped and manipulated violin, building marvels out of impeccable timing, but on record anyway, I like how Theresa Anderssen and Andrew Bird do it better. But there is something very, very real about naming your adult act for a video game; it honors who you really are and thus, I am swayed by how this manifests in a live setting on this recording. I imagine I'd be straight smitten were I there.

Ditto for the Sex Pistols, when they made a Baton Rouge pitstop during their first American tour three years before I moved to Louisiana and a decade before I started my extended pitstop here. I've heard from a few people that were there that it was a pivotal moment for them but frankly I always sorta doubted those claims. I always thought the Sex Pistols were more the idea than the reality, but these live recordings offer up the OG sons of anarchy as a crack bar band. Listen for yourself.

The Kingfish was in a shopping center that now hosts a Mary Lee's donut shop advertising pigs in a blanket from a spectacular homemade poster. If I had an image of that sign, it would be illustrating this post. I am stuffed to the gills form my work lunch but the thought of it (the sign more than the product) made me want a pig in a blanket. See, I already like this blogging style.

* Sticking to accepted superhero secret identity nomenclature. Back in the day when I tried to emulate my favorite comics with transparent variations (not unlike the tack my writing has taken in adulthood) I would get it backwards: Green "Hal Jordan" lantern, which worked fine until I created a husband and wife superhero team Warrior and Warrion. I decided that their identities would be kept secret, even from the reader, and gave every new character a two part name from there on out.**

** I might start dicking around with footnotes too. Consider yourself warned. I will maintain tagging 99% of my posts "today's soundtrack" for reasons that I dare not explore too deeply.
Posted by Alex V Cook at 12/16/2009 01:08:00 PM