set the calliope on "kill" 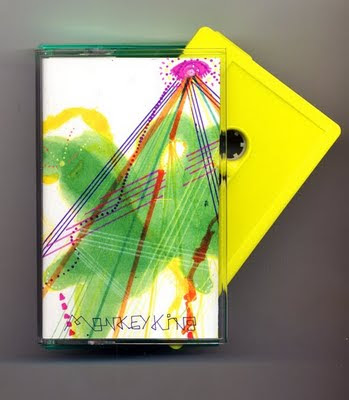 Dudley Perkins - Expressions (2012 A.U) (listen) I used to think Common had his finger on my particular hip-hop button but one Dudley Perkins of Oxnard, CA is jacked into my hip-hop spinal fluid, pulsing right in sync with my nerve endings, flooding the pits of my old gray, wrinkled brain with summa what he's havin'.

"Monkey King is Philippe from Goa on voice/electronics and Will Glass from Dirty Projectors & The Octagons on drums. We have been playing together for ever. This our first release and it's called: La Lune Se Cache Derriere La Montagne. It sounds like Ash Ra Tempel playing an Atari 2600 in an animal spirit possession ceremony."

Love - False Start (listen) I have a hard time listening to any other Love album besides Forever Changes for the same reason I have trouble listening to any album besides Forever Changes, but I just read of Love's 1971 Love Lost being dusted off, and until it bobs up on the stream, this will have to do. Jimi Hendrix, a sixties/seventies guitarist of some note, performs on the opening number.