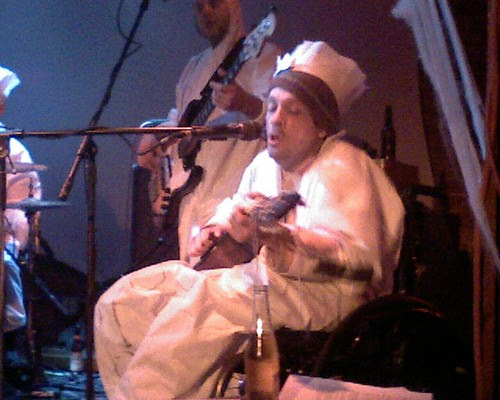 Oh, and man, it's hard to know how to feel about this Vic Chesnutt situation. Maybe relief is all he wanted. "Vesuvius" is one of my favorite Vic Chesnutt songs, with the thunderclap of a line "Christian charity is a doily over my death boner." It may seem in poor taste to bring up such an image in such a context on such a day - I decided against making it my Facebook status, for what that's worth - but it is exactly that kind of uneasy place that Vic delighted in taking us, so there.

I took the above picture of Vic when he performed here in Baton Rouge to about 10 people on Halloween night in 2008. I bought him that very beer that requested "to wet his whistle." At the end of the night, I thanked him for coming, and he said in a high, fluttery, sage way that (paraphrasing) it was his wish that all people everywhere get everything they want in this world.

Get better, Vic, and I'll let you figure out what better is.