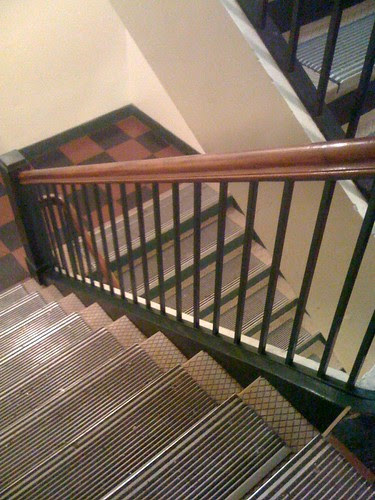 Atlas Sound - Logos (listen)
A crusty runaway-type playing a legitimately heartwarming minor key banjo version of "You Are My Sunshine" on the sidewalk by the coffee shop.
Gergory Alan Isakov - This Empty Northern Hemisphere (listen)

"You Are My Sunshine" is everywhere in Louisiana. It became our state song in 1977 in recognition of it having been a 1940 hit for Jimmie Davis who was the state's famed singing governor in the 60's. Got that? Out on the sidewalk, Ol' Crusty nailed it, and if my phone had video that is what you'd be seeing instead of the push-me-pull-you of the stairwell. That Atlas Sound record is a lovely thing, really and truly, but it and everything else is eclipsed by the rolling thunder of Gregory Alan Isakov, of whom I have just heard but am now an ardent fan. So hard to get heartfelt right without blowing it, maybe because the heart actually doesn't feel anything, it just keeps pumping away until it doesn't and I'd like to keep it doing so for as long as possible, which is why I take the stairs.

That, and I'm only on the second floor and the elevators are totally scary even if I wasn't; the cleaning crews will put their gear in the elevator, press the button and then race up the stairs to meet it on the next floor for legitimate fear of being trapped inside.