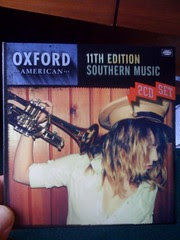 Brother Tyrone - Mindbender - Remember when you were looking for that excellent contemporary soul album that wasn't pent up in some retro-revisionist quandary trying to funk it's way out of its own nostalgia tangle? That was me? Oh. Here it is anyway: New Orleans' own Brother Tyrone. The soul jam of 2009.

Various Artists - Oxford American 11th Edition Southern Music CD (from Oxford American) Speaking of non-pent-up, quandary-free soul, I may have mentioned I have a piece in this most recent OA music issue (finally in my sticky fingers) on Andre Williams corresponding with track 10 of disc 1 of the sampler included therein. Every year I think this year's edition is the best one yet, but this time I mean it. Past blog obsessions such as Henry Flynt (diligently profiled by John Cline), Bukka White, Gil Scott-Heron ("Shut 'Em Down" might be the funkiest song of his I've ever heard), Paul Burch and swamp pop nebula Lil Bob & the Lollipops are all present in this dispatch from the southern end of the cosmos. I haven't event gotten to disc 2, the first installment of the Southern State series illuminating the untold wonders of Arkansas. I love disc 1 from Lucinda Williams' tipsy-sounding drawl-of-hotness intro to the last pluck of Abner Jay's banjo.

This slideshow video of Andre Williams' "Cadillac Jack" offers but a teaser of the wonders awaiting you when you go buy your own copy.

And, if somehow you are not tired of me talking about it already, all us contributors were interviewed on the OA website, talking about why music is important to us. William Bowers wins the day by including the following sentence in one of his answers:

She looked at me like I was a lost, farting robot.

If "lost, farting robot" doesn't sell you on it, I don't know what will.

The Feminine Complex - Livin' Love - Or this...