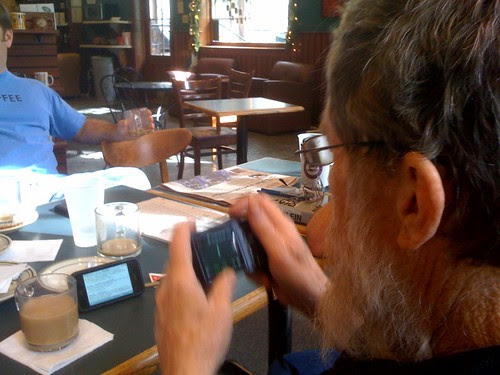 This is a picture of my friend Terry taking a picture of something on his phone that he wanted to remember. I would question this as a viable means to record something if it was anyone else, but in my experience it is wisest to let Terry's process play out, because it tends to reveal the greater truths. For instance, the thing he is trying to remember is the name of Howard Buechner, an author that deals in the mystical side of the Nazis (a shared interest of Terry's) and in particular, his book Emerald Cup Ark of Gold: Quest of SS Lieutenant Otto Rahn. Terry reads obscure shit like that. And everything else.

Rahn was a gay German medivialist who under the auspices of the SS went to France to search for the Holy Grail, according to wiki, "he was assigned guard duty at the Dachau concentration camp in 1937 as punishment for a drunken homosexual scrape." He resigned from the SS in 1939 and died that year, freezing to death on a mountain in Austria. Rahn is widely considered to be the inspiration for Indiana Jones (see this book) though neither Lucas nor Spielberg have ever directly indicated such.

Terry and I became friends because our daughters are friends and after this prolonged tale of Nazis and Indiana Jones, I got up to check on our daughters who were playing in the back of the coffee shop. Maya was pretending to crack a whip and informed me, ignorant of the discussion happening across the room, that they were playing Indiana Jones. So glad they weren't "playing Nazis." This is precisely why when Terry is taking a picture of something on his phone, I let him, because with these seemingly foolish actions, the veil over the skeleton of the universe flutters for minute, and interesting things happen.
Posted by Alex V Cook at 12/29/2009 11:34:00 PM