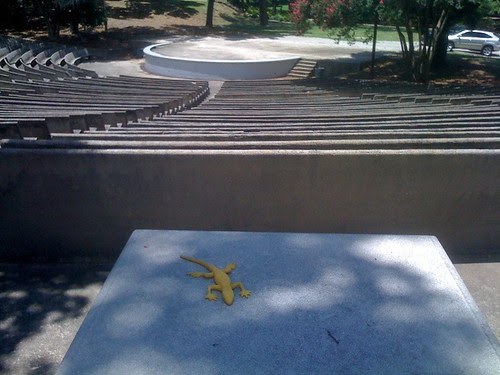 Uggi the lizard, Maya's favorite thing in this whole forsaken realm, at the LSU Greek Amphitheater

Work of Art: The Next Great Artist
Jason Moran, Ten

I heard a thing on NPR about Mr. Moran's record, citing a lot of cultural appropriation and fusing influences and mimicking the patter of hip-hop and well, I dunno about all that. It's an affable, compressed modern jazz record, pressure cooker kind of stuff, with just the right amount of sudden turns to keep this from being another garden stroll. His bassist, Tarus Mateen, is the real magician on this set. It is like he has a black hole tied up on a leash, ready to pull its roaring whirl in when the situation calls for it.

I got called out for being a "wonky" writer by one of the students in my class last night - this is the same person that came up to me once at Cafe Des Amis saying this was not a place for that "wonky, music critic bullshit" - and fair enough, maybe it is and maybe it isn't. You get to make that call when you are the one with the pen. I don't know exactly what that accusation entails, but at the mythic bar of wonkiness, I expect there is a space at the rail for me. And good company.

It was a good class. This was where we ran first drafts through the mill and pieces got picked apart and reassembled, and I think the right wonky balance search and destroy was achieved and like all the other classes, has helped me look at my own writing and how to get the Truth from point A to point B.

After last week's triumphant stab at the world of reality show recap blogging (Jamie Lynn, or a spambot representing her, responded on my post about Work of Art) I was raring to go, but the book design episode didn't really inspire a lot of commentary. It was a plea for commercial work and the right guys delivered, though the Time Machine cover with the little ladder was better and more modern novel than the Dracula one that won. I also want to say that I may have met Peregrine before; her work was everywhere when we lived in Kansas City, though it doesn't seem like its evolved so much, or if it has, it's in less subversive directions. My girl JL's piece was cute, almost there. I think a cover for Alice in Wonderland playing on the eat me, big/small Jefferson Airplane-ity like Nicole's also almost-there piece would be fun. Maybe have the title big, cramming the room on the front with the little piece of cake on a plate, then the title small sitting next to the empty plate when you open in it. Or maybe I should stay out of book design.

But poor, crazy, old Judith. She is neither that crazy nor that old, but I figured that the Dorian Gray programmers of Bravo would keep her on just to stoke the indignant stoves of the Yoot, but her book cover was a lesson in whatever wonkiness is. If you have the opportunity, do something with it. The important part of "being and artist" is the active, pointed "being" not the static "artist" because the "being" shapes the "artist" and if those are in sync, you just might end up with "art."
Posted by Alex V Cook at 6/25/2010 08:31:00 AM