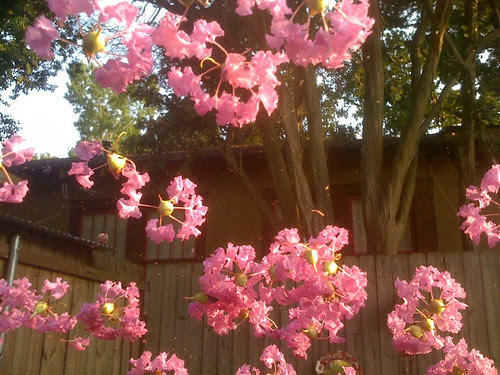 Crepe myrtles on my windshield

Media Announcement: I reviewed the naked yet ornate art-song collections of Corey Dargel and Matt Marks up on the outsideleft. I was looking yesterday and thought I should excise "up on" from my written vocabulary, a forced colloquialism, but today, I think it describes web writing so well: fancy souvenir plates and jars of seashells up on display shelves, mostly useless but maybe why we have shelves.

The crepe myrtles at the back of the driveway have finally bloomed and are finally inundating the windshield. The tree shades the driveway and somehow keeps the oppressive Louisiana summer at bay for a week longer than most (though the one up front barely blooms at all ever) thus delaying its own heat-triggered orgasm. The petals used to clog every cranny of the old Corrolla, so much so that there would still be a liberal dusting when I got to work. Add to that the stickers Maya stuck on her little back window and that car was a rolling riot of color. When it would actually roll.

Speaking of when things start rolling, Nathan is the son of Sid Williams, proprietor of El-Sid-O's, the venerable Lafayette zydeco club about which I laid down 1K words for the book yesterday. I'm pretty sure I've seen him before but it's hard to keep the Zydeco Cha-Cha's and Zydeco Flames and Zydeco Twisters and Playboys and Nu-Breeds straight after a while. Nathan is one of bluesier players still operating, holding closer to what made Clifton Chenier so universally engaging.